Where I can find a script or solution for generating a plain-text JSON topic on our private MQTT server? 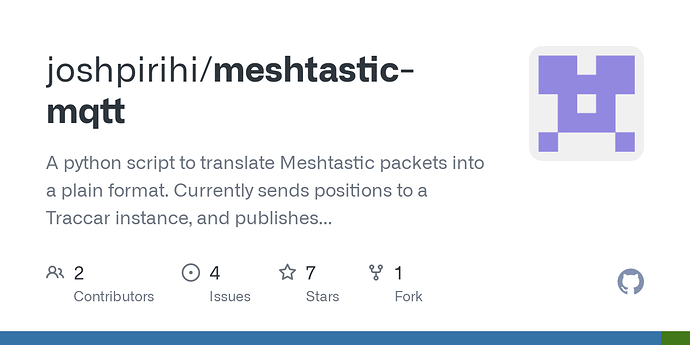 A python script to translate Meshtastic packets into a plain format. Currently sends positions to a Traccar instance, and publishes battery % and environmental plugin data to its own topic (eg for...

Any suggestion on how to use this? As I understand it’s a python module?

the instructions on the mqtt docs page should get you started. Its a standalone script that runs on its own, you just need to change some of the hardcoded parameters (that docs page says how).

Sure, but it’s hardcoded to use tracckr app. It’s a nice example of how to export nodes positions to tracckar server. But not clear how to use it like it’s used on the “official” MQTT server - decode position and message protobufs and send it to JSON topic.

This is a different script to the one on the official mqtt server. I couldnt find that one anywhere so wrote my own. Can you give me an example of the json you want out of it? Text message support is on my list to add, it’d be easy as to make it spit out position data as json too.

You can disable the traccar stuff by setting traccarHost = "" 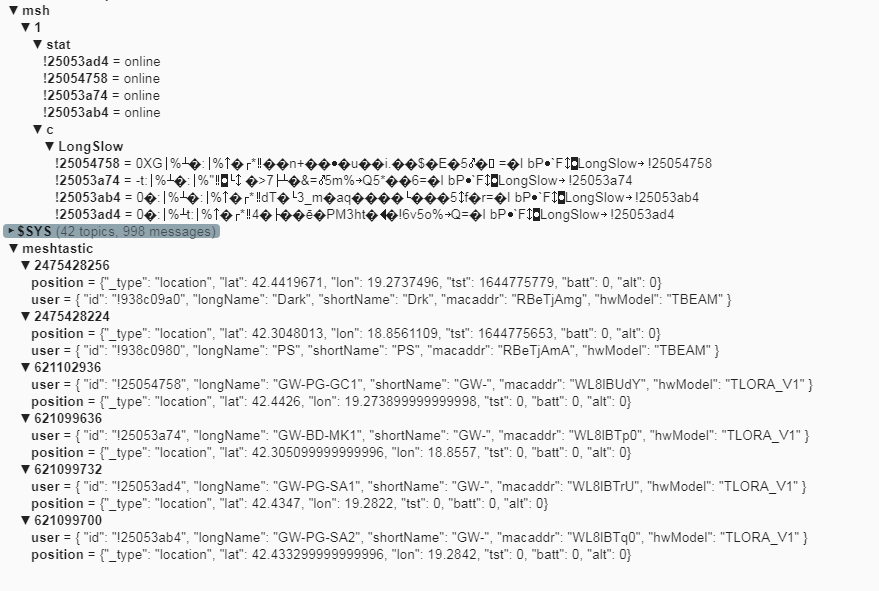 I’ll add text message support hopefully in the next few days. A few people have been asking for it

I don’t really understand why this is not built in in Meshtastic. The MQTT integration feature is pretty much useless without this.

To date most people working on MQTT have been focused on sensors, if you have a messaging use case pull requests are welcome!

my meshtastic-mqtt script supports text messages now, so you can get the plain text data out of your mesh that way

@joshpirihi I know, but having an external tool postprocess MQTT messages to just decode the protobufs seems to be overshooting for me. Also, running this with AppDaemon on Home Assistant is somehow not stable for me. Looks like it just stops working after some reconnects.

This adds decoded plaintext message publishing to the MQTT feature. Incoming mes…sages of type `TEXT_MESSAGE_APP` are published (in addition to the raw message publish) as decoded plaintext to the topic `msh/1/txt/CHANNELID/NODEID`. The purpose is to make integration with generic clients like Home Assistant easier. Remote nodes can send stringified JSON payload that can directly decoded and used in HA automations without any extra plugins or manual decoding. This is obviously a first attempt, some questions: - should this be configurable with a setting like `enable_mqtt_plaintext`? I'd argue this does not need to be configurable. As long as MQTT is enabled, it emits messages to the bus. `stat` messages are also directly published and are always enabled. As the txt messages are published to a different topic, the consumer can do the selection on their side. - is there a case where `mp.decoded` may be null? Is is guaranteed that the payload is already decrypted when reaching this point? The source and the doc on `payloadVariant` is not clear to me. - the sender id is not added to the published message. I'd argue this should be left to the payload (as with other metadata) to keep the message as clean as possible and not create the requirement of some sort of envelope. In theory, the sender could be added to he topic, for example in the form of `msh/1/txt/CHANNELID/LOCAL_NODEID/REMOTE_NODEID`, but I am unsure if this would violate usual MQTT best practice. Btw, this is a PR against `master`, but current `master` does not work for me when I enable Wifi and MQTT. My node (Heltec 2.1) boots into a crash loop on startup. `1.2.57` works fine though.

Followup PR that adds full JSON encoding/decoding support for uplink and downlink. It works, but I need some review if I did the radio sending correctly and did not miss some memory leaks. Any help/review appreciated.

**Draft for now, need advice** This updates the MQTT integration with JSON me…ssage encoding/decoding support for uplink and downlink. **Received messages** of the types `TEXT_MESSAGE_APP`, `ENVIRONMENTAL_MEASUREMENT_APP`, `NODEINFO_APP` and `POSITION_APP` are encoded in JSON messages and sent to the MQTT topic `msh/1/json/CHANNELID/NODEID`. Payload is also encoded according to the message type. An example of a received `NODEINFO_APP` message: ``` { "channel":0, "from":2130636288, "id":452664778, "payload":{ "hardware":10, "id":"!7efeee00", "longname":"base0", "shortname":"BA0" }, "sender":"!7efeee00", "timestamp":1646832724, "to":-1, "type":"nodeinfo" } ``` If the message received contains valid JSON in the payload, the JSON is deserialized and added as a JSON object rather than a string containing the serialized JSON. **Sent messages** will be checked if the MQTT payload contains a valid JSON-encoded envelope: ``` { "sender": "SENDER", "payload": { "value":"HELLO WORLD" } } ``` `sender` and `payload` fields are required for a valid envelope. If a valid MQTT message is found, the message is sent over the radio as a message of type `TEXT_MESSAGE_APP` with the serialized `payload` value in the message payload. **Questions** 1. In `MQTT::mqttCallback()` I need to send the message over the radio. I am using `service.sendToMesh()` for this, but I am unsure if I used this correctly. especially with the involved `packetPool`. I am not sure if I have a memory leak there. 2. I am not a C++ developer. I may have missed memory leaks, not freeing what I probably need to manually free. Any help appreciated here.

We’ve had two reasons, the first is that by sticking with the protobufs, we don’t have to maintain the translation layer between protobufs and json as things change. In your draft PR, you only selected a small handful of the data available which I suppose is ok. We’ll need to figure out volunteers for when requests for changes in the area come up.

Second reason was size required by the inclusion of a json parser. You’ve picked a very lean library and that’s appreciated.

Over all, you’ve done great! Thanks for your contribution!

Here you can see my modified version from the original.
Many parameters of the portnum: POSITION_APP, TEXT_MESSAGE_APP and NODEINFO_APP are decoded and republished. 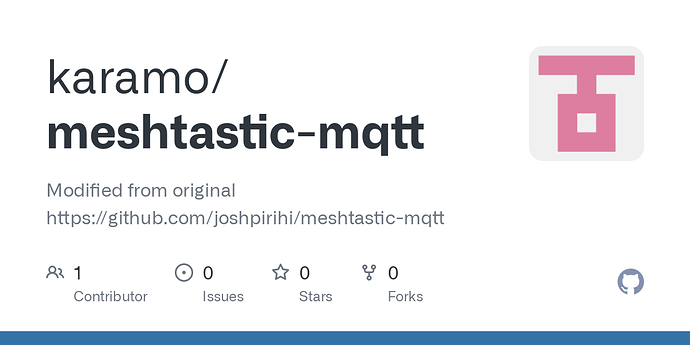