This version was focused on bug fixes. If there are no major problems, it’ll be promoted to Beta. 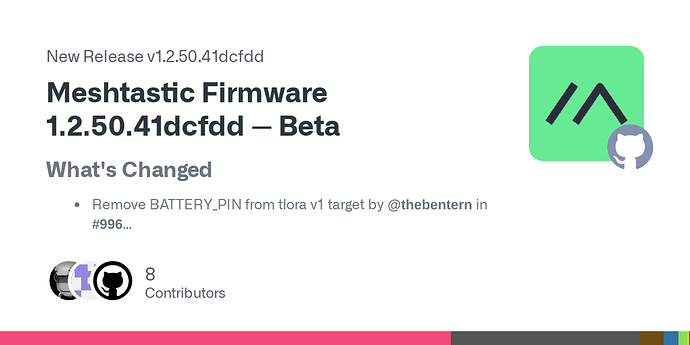 Report on channel utilization on the screen and myNodeInfo

The old CPU speed on the oled display has been replaced with “ChUtil” or channel utilization. This will show how much traffic there is on your channel, both from your mesh and any other lora traffic that may interfere (other meshes, helium, lorawan, etc).

I made a post yesterday about Tbeam FW 1.2.50 not found in Android 7 mestastic APP from 1.2.45 to 1.2.50 / 51. Remove the post hour later because it solved. This morning upgrade to latest FW and APK Tbeam FW 1.2.50 + meshtastic 1.2.52 trouble is back and not fantastic
Android 7.0 pair BT Tbeam and APP meshtastic APP 1.2.52 also see device, but not give access to Tbeam device some reason not clear
Same as yesterday after upgrade to mestastic APP from 1.2.45 to 1.2.50 / 51.
I solve it yesterday to roll back FW Tbeam to early versions and upgrade every version from start but i think not the way.
How do i ADD pictures to post?

Seems like it pulls the name from the beginning instead of the end of the MAC address: 73:c7 … 1c:f2 and also in reverse!

With the 2 T-echo that i have, same result : Critical fault #8 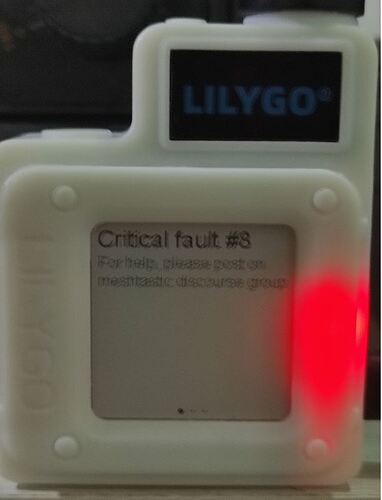 After updating to 1.2.50 all 3 of my t-beam boards will not get a gps lock. Anyone else seeing this?

Ever since updating to 1.2.50 when using the python cli, most commands return the below posted output. Checking Version or such work, however it reports 1.2.48 instead of 1.2.50.

Also it seems now the AP web interface is not working, all I get is a blank page. It was working in the earlier version.

Blank page means the web content wasn’t loaded. Did you use the install script in the firmware zip file?

I found some ‘bugs’ in firmware-1.2.50 when I activate the node as WiFiAP.

Sometimes, just after activating the WiFi AP, the node get very slow and even can reset itself, the node will then come back as IP 0.0.0.0 and needs a push-reset-button.
Getting in WiFi mode on a Android(8.0) phone or on a Win10 tablet is slow and difficult (maybe browser issues)
On a linux laptop in Chromium it works best for me, the connection stays stable.

On the UI:
When I choose the ‘nodes’ button nothing happens, blank screen, need to go to previus page.
In the message screen the time stamp always is the same 01:00 AM.

Hi,
I see that the ChUtil is varying a lot even after some power on time ( from 0…22%). Is it calculated only for the last minute or so? If yes, wouldn’t it be better to have a longer time average?
Just a thought…
Thanks.

Next version smooths it a little bit, but the 1 minute window remains. This is intended to be “what is going on now”.

If longer averages are needed, the airtime data can be reviewed. That has 24 hours of data.

We picked 42 because that’s to the answer to life the universe and everything.

In AP mode, try going to 192.168.42.1/json/report on your device. That’s an internal page served by the web server. If you can get to that, then you know the device is functioning normally.

We picked 42 because that’s to the answer to life the universe and everything.

How could I have missed that, it’s so obvious

I have to learn a lot of stuff, I just started 2 weeks ago with this awesome project.