It would be great to test out a seudo mesh network here in the bay area granted there has to be some locals here. I have a great vantage point 12 stories high downtown Oakland (Chinatown) facing Alameda / SF / Bay Bridge / west Oakland.

I finally got a 2nd shipment of TTGO V2.1’s along with 5db Moxon Antennas and have placed one outside on my balcony for range testing.

The Moxon’s are impressive. It is probably obvious to most, especially with the silk screen, but I had them pointing in the wrong direction on my first range test (90 degrees out, still 100km though). They essentially radiate from the edge like this. 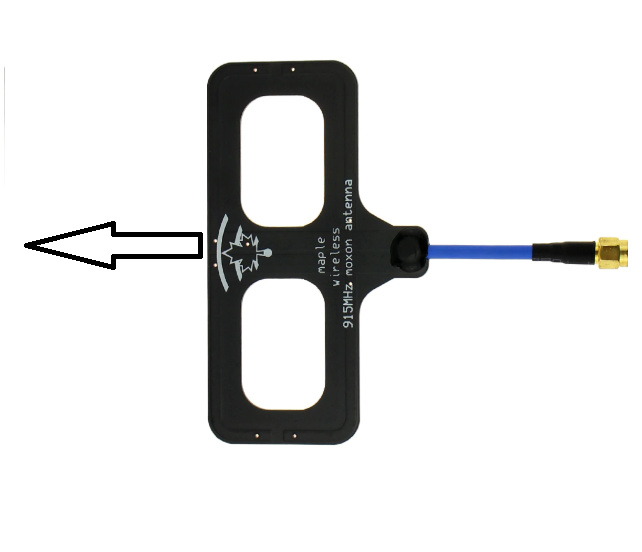 Noted! I took a 2nd TTGO down to berkeley marina yesterday and was able to briefly pick up signal from my condo in chinatown oakland in addition to a 2nd unknown meshtastic device in the vicinity!

Hi, I wonder how you picked up the signal. Where would a foreign node show up and what settings need to be set up?

Sorry if this is a dumb question, but I can’t figure it out how to “scan” for devices from other meshes.

I’m on SF by the bay. Should get three devices in a week or two. I’ll power one up and see about joining your mesh.

my node is back online with improved antenna outside in downtown oakland. see if you’re able to make contact!

My units will be here by the end of the week. I’m at the marker on the top left and the polygon is roughly where I have line of sight. It’s 25km from me to the East side of the San Mateo bridge. Is anyone within the polygon? I’m happy to get another antenna to improve my range. 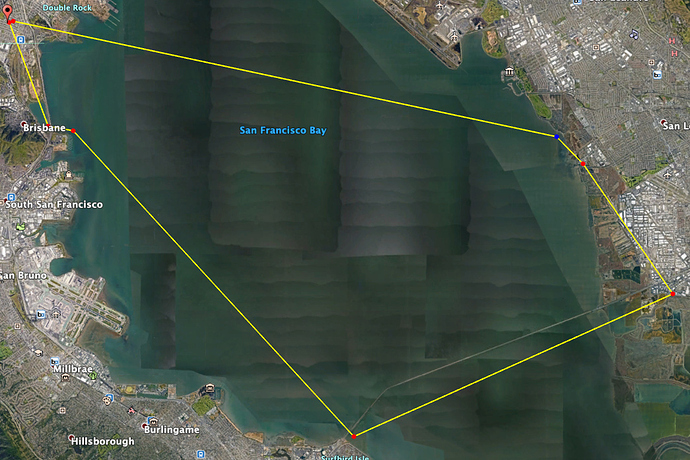 mc-hamster I live close to you (essentially 92 and 280). Alas, I need to stay focused on my sw dev tasks so I don’t think I can help with this noble project. But I can contribute a datapoint: about a week ago we hiked to the top of mission peak and I brought a node with me. It had no problem pinging the node at my house (so across the bay and about 7 miles) - though line of sight was probably close to perfect.

I do run a TBEAM on my deck facing the bay bridge down to Fremont, I currently futz with it a lot but I should probably just install one permanently and always running the release load. I’ll try to do this sometime in September. I also have a moxon and should probably just attach it to that node.

I don’t think we’ll be able to get a mesh between our two locations without an intermediary. Maybe there’s a fantastic mesh solution for that. I’ll keep an eye out.

Regardless, maybe when this pandemic is over we can have a meetup and I’ll get you a beer. It’s the least I can do, you rekindled my long lost interest in C.

I’ve created a collaborative map pn CalTopo that people can add their node names and LOS to help us better identify opportunities where we can build links (or they are a possibility already):

My node’s offline for the next week as I’m headed to Canadian Border along north Minnesota to canoe and fish in the wilderness for 8 days. Will bring it back online when I’m back on Monday 8/31.

Open to suggestions on a better collaborative mapping platform - defaulted to CalTopo since I use it for mapping out backpacking trips.

One other thing to note - I may be able to get an additional south facing node on the top of my building (15 stories tall) which could act as a relay to Berkeley SF. Just need a 3d printed case and tiny solar panel to power.

Thanks for setting that up.

I put myself down as a marker (Oontz) and will draw my LOS when I’m back at my desk. I don’t know of any other tools collaborate with.

I look forward to eventually connecting with you.

Maybe we can create a wiki page that lists areas with simi permanent nodes, and the qr code to join the channel they are on.

I would really like to see an option in the channel settings to change over to a ‘public’ channel that is hard coded in the app so anyone with the minim app version can easy switch to it. That would make it super easy to find nodes in a given area and play with range tests.

settings need to be set up

Maybe I am missing something, but I cannot find a way to restore the default channel from within the android app if the channel was changed to something else.

The best I could do is maybe scan the qr code of a device that never had the channel changed.

i’m back from my trip and my balcony node (smrtallk / 0f760) is back online with a Moxon antenna as shown in map link below:

let me know if anyone can pick up the signal

Reflash the firmware. That’ll return it to defaults.

not exactly easy to do out and about if you want to join the default chat group. If someone can add the option to switch from a list of chat groups that would be really cool.

Here’s my better estimated coverage. There’s no way I’m going to make it out to downtown Oakland without going up 50ft above my roof. 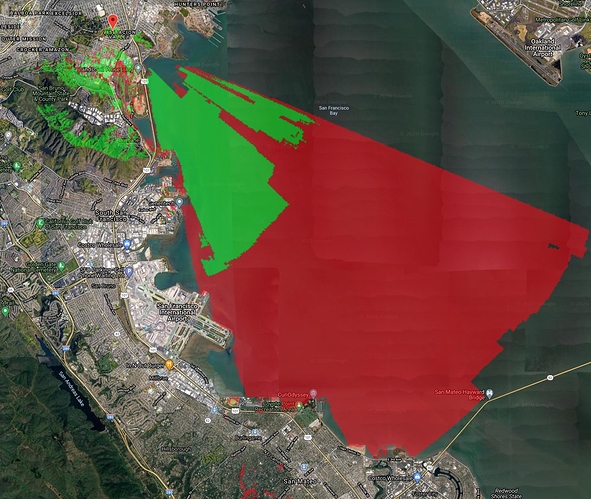 Update - I have a HELTEC / Moxon and TTGO / Omni on my balcony and was able to briefly connect sailing around treasure island yesterday. I think a stronger omni antenna may be in the cards to expand relay coverage.

Also had a random node “Bob B” connect yesterday/today!