How to fill in "coverage" details on ve2dbe.com

I purchased a couple of these boards,

which actually came with the longer hinged antenna pictured here,

and just for fun, I thought I’d dink around with https://www.ve2dbe.com/rmonline_s.asp.

HA! No idea what to fill in for the transmitter and antenna values. I understand height and 915MHz, but other than that … 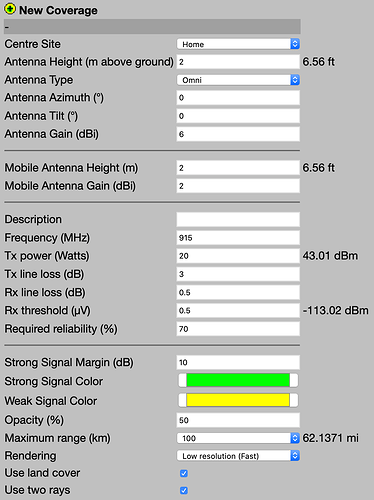 Obviously not critical, but it would be fun to pre-screen some range test locations. Help?

You will find a lot of great information about antennas here: Antenna improved range

You could refer to your question on that thread. As far as I know, @eriktheV-king, @G8YTZ, @thomslik, @ohcdh, @Anelito and @sens8tion are all members with great understanding of radios and different types of antennas.

Queried for a few similar looking antennae, and after fiddling with some numbers, these are the values I came up with. The resulting coverage map is a relatively close echo of what I’ve found while actually driving around. 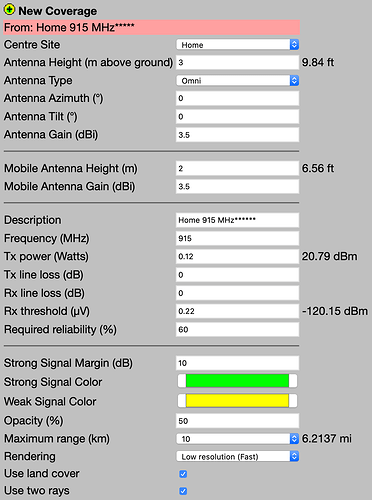 BTW, I’m using slightly modified versions of the Sender and Receiver sketches from https://github.com/LilyGO/TTGO-T-Beam
(added EasyBuzzer.h to the receiver sketch, a piezo to pin2, to alert me when a packet comes through, so I don’t have to watch the OLED).

I’m sure these numbers aren’t the Real Deal, but they may help map out good locations for repeaters.

The TBeam uses the HPD13A module which from Aliexpress has these specs. 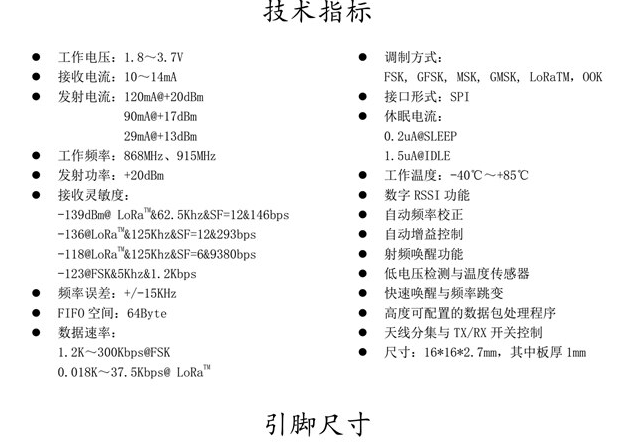 Those antennas that come with the modules I’d assume are unlikely to be more than 2dBi. A good ULF to SMA pigtail would be about -1dBi.

So I would use:

Its an amazingly good tool and fun to see what the potential of a mesh could be!

Gain on the antenna models I was comparing against were between 2 and 5. I can’t find specs on an antenna that looks like the one in the second image above, so I went with 3.5, since it looks more like the 5db units than the 2s.

No pigtails, the antenna is connected directly to the board, so I went with 0 losses, but sure, there still there must be some loss.

Not sure what threshold is, but changing from 0.22 to 0.035 threshold displays WAY more range than what I’m getting in the real world.

What’s interesting to see is this:

Sure, the tool doesn’t know everything, doesn’t account for all variables, but the predictions seem odd. I guess the only thing left is to leave a transmitter at the dog park, drive back home, and try it.

Two years later, does the conclusion of this thread still represent the best settings?

So I would use:

Is there enough difference between the different hardware now supported by Meshtastic to use different Radio Mobile values for different implementations?

Is there a repository of collected data for common antenna values from the various threads on the topic, (including Antenna improved range and Meshtastic to connect isolated villages - #11 by luandro)?

Are there firmware differences which have improved and/or changed any variables which might give use more accurate coverage estimates? For example:

the current code base was transmitting at a lower power than I thought, so soon (I’ll release the build next week) you should be able to get a few dBm more power.

I’ve been using the tool for a couple years, and it doesn’t look like small tweaks change the coverage maps a whole lot. All the same, it would be good to know how well the maps are matching the territory with the benefit of hindsight.

I’ve just produced a coverage map with my details. It seems very optimistic to me (much better than I have experienced walking/ driving around so far).

I will be very pleased if Meshtastic works as well as this map suggests in the end!

In general, you’ll need to use better antennas than what ship with devices from the manufactures.

These coverage tools also don’t necessarily work well for the LoRa technology since they assumed traditional modulations. With Lora, we can get signal below the noise floor.

With those two considered, the tools are ‘ok’.