Can a 'Y" connector or an electronic adapter of some sort be used (or made from scratch) to allow connecting both a directional antenna for accessing a remote node and an omnidirectional antenna for allowing access to your node in a 360° pattern? Would it just be a matter of connecting the conductors together in the proper parallel configuration or is there any circuitry required?

Theoretically no, because the two antennas are equivalent to parallel connection. If two antennas impedance are all 50 ohms, the impedance seen by the device port is 25 ohms. This impedance mismatch seriously affects the performance.

If you have to use antennas such way, you need to design antennas with a characteristic impedance of 100 ohms. Or you may need to use RF Power Splitters/Dividers + RF power amplifier

More details about power splitter. It is not a simple Y connector.

Your reply helped me find the following which I think gets me where I wanted to be:

I have VHF 2M repeaters in two different azimuth directions from my site. Rather than rotating my Dipole, is ther a way to connect two separate...

“If you parallel two 50 Ohm antennas, you have a 25 Ohm antenna with a higher SWR than you’d probably like to have. So, what’s usually done is to use an odd number of quarter wavelengths of 75 Ohm coax at the feedpoint of each antenna, then combine those 75 Ohm coax “stubs” using a coaxial T-adapter and use a 50 Ohm feedline down to the rig. The 75 Ohm sections are matching sections which change the impedance at the rig end of the stub to 100 Ohms, so when you combine the two of them, they become 50 Ohms again and your SWR will still be low, like it was for a single antenna.”

The method he mentioned is called Transmission Line Matching Technology, I described the calculation details in the end of my article:

You just need to match each antenna to 100 Ohms and connect them together to achieve 50 Ohms in parallel. However, the antenna’s impedance bandwidth may degrade a bit for this kind of configuration,

And yes, you will lose 3dB for a equal-split configuration as what he mentioned, thus a power amplifier may necessary as I mentioned before.

The velocity factor is also called “velocity of propagation” and can be found the cable datasheet. It indicates how much the cable slows down the signal travelling in it. In theory an electrical signal would travel at the speed of light, but in practice it’s slowed down by the cable conductors and dielectric material. In the example above, that particular cable slows down the signal so that it travels at 80% of the speed of light, or by a factor of 0,8.

Physical length is measured from braid to braid, however using connectors will influence that. The best way to determine the right length, accounting for material tolerances and measurement errors, is to use a VNA. A “nanoVNA” is very cheap, but must be calibrated and used correctly.

Such a stub is a relatively-narrowband device, if I recall correctly it’s about ±10% of the centre frequency at -3 dB, so that shouldn’t be an issue at 433 MHz and above.

I’m lazy, so I would save myself all the trouble by using an omni antenna on the remote node and using a high-gain directional antenna at home, if that would be possible,

A) It would be a bit more pricey, but does it make sense to just have two meshtastic’s at my location? My first unit (#1) with a directional antenna attached, will connect to the distant unit (#3) that is too far away to connect to with out a directional antenna. My other unit (#2) with an omni directional antenna attached would be used to repeat signals from it, to units closure by? My setup would be more expensive and involved (USB battery pack, solar panel, antenna, & enclosure for each unit), but I want others to have a more simple/inexpensive setup so as to not confuse and dissuade them from being involved in the project…

B) The thing I am struggling with is that many of the initial units in our area will be considered main “hubs”, at least at first, so they would need to do both types of connections like mine as well. One unit connectes to a distant unit in order to be part of the greater network and would ideally be setup to repeat that network to other nearby users. Additionally, able leap frog that signal to another distance hub to feed others? This is what I am trying to gear up for and I am getting a bit lost in the details. The idea I believe is called a star topology. FYI, we are a collection of nearby small towns. I feel like I am trying to reinvent the wheel, I am sure there is a simple solution

Here are a couple: 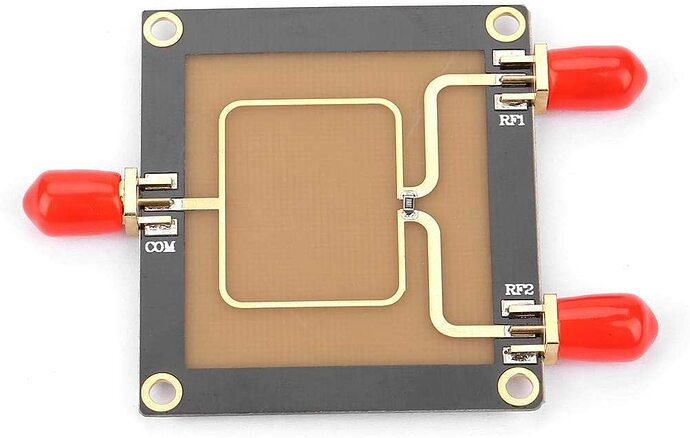 The simplest solution should be using high gain omnidirectional antenna and just rising the transmission power at each center hub of star networks, however my 1 to 4 W adjustable device is still under design process. I think the max TX power module available on the market was 1W.

The power splitter you mentioned could be used to connect 2 antennas, however each antenna will lose 3db Power. In other words, your directional antenna could not reach the destination as before. Theoretically, the coverage of the directional antenna is half of the previous configuration (Only one antenna).

The power splitter you mentioned could be used to connect 2 antennas, however each antenna will lose 3db Power

I do not (completely) agree with this statement.
Tx and RX behave different.
While receiving, all the “power” from each individual antenna will pass through the directional coupler without any loss 0dB , almost as if it were not there.
When transmitting, the power of the node is split between both branches and each antenna receives half (-3dB) of the power (assuming a matched 50 ohm system)

Yeah, you provided the more precise description. My mistake, I should describe the power as link budget, the link budget will lose 3dB. Thus, the directional antenna may not able to reach the original destination.

Hi! The idea of combining a Nordic core with an SX1276 appealed to me a lot. I would like to take up this idea again and contribute to its implementation. As a developer for electronic circuit design, I have three product variants in mind whose hardware I would like to work on. 1. A Sensor-Node Main features should be: Extremely compact (integrated antenna) ultra low power consumption only active when an event occurs 2. A Portable-Node (comparebale to the TTGO) Main features sho…

Hi, I’m new to Meshtastic and don’t know if this combination is possible. I would do it like this. Where there are greater distances between islands, I would use this network topology. The islands are connected by separate nodes using directional antennas, and after a serial connection, they connect to a node, which locally communicates with nodes that are clients.

I’m still planning to experiment and put together both an omnidirectional antenna and a directional antenna into a combiner with the proper adapter or circuitry and see what I get. I will update this when I’ve made my atttempt which may be a while because my network is starting out small and slow.

in my opinion, this is not a good solution. I would separate long distance communication with local communication. Even if it would be impossible to connect two nodes via serial, they could be connected via LoRa radio interface. A connection via serial would be better, because the long distance nodes could work on a different radio channel than the local nodes.

Is the serial connection of 2 nodes supported by any firmware?

Is the serial connection of 2 nodes supported by any firmware?

It is not supported at this time.

Can someone tell me if you put 2 x 50ohm antenna’s into the following combiner (specs say its 50ohm), what is the ohm of the output? 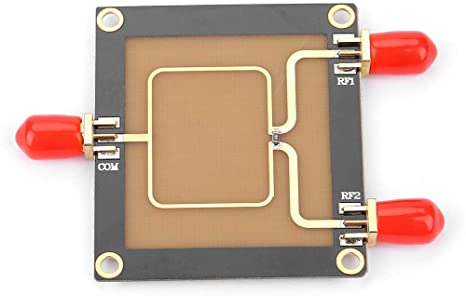 For this design, theoretically all three ports are all 50 Ohm 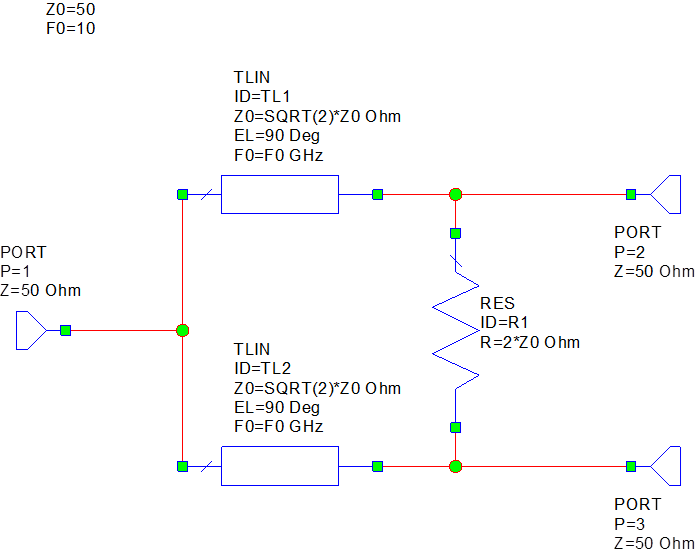 I find it hard to believe the specs for this simple divider/combiner are truthfull.
Specially the VSWR of 1.4 and the working BandWidth 100 MHz to 2500 MHz

Improving the Bandwidth
One of the biggest drawbacks of the Wilkinson Power Divider is that it has a quite narrow
bandwidth. This can be improved by adding a quarter-wavelength section in front of the
power combiner. In this way the impedance transformation is done in two steps, thereby
improving the bandwidth.
The bandwidth of the power divider can also be increased by splitting the two quarter
wavelength sections into multiple sections with a resistor between each section [11]. A
common realisation is to use three sections instead of one. More than this can also be used to
further increase the bandwidth. This obviously makes the circuit more complex, with added
loss and increased area consumption on the chip.
A four section power divider is reported to have a VSWR < 1.11 at a 2:1 bandwidth and
isolation between the outputs better than 26 dB. This can be compared to a traditional two-
output Wilkinson Power Divider which has a VSWR < 1.22 at a 1.44:1 bandwidth and
isolation of at least 20 dB.

Wideband dividers/combiners in cable-TV are always made of wideband transformers instead of transmission lines.

I do implemented wide band Wilkinson Power Divider before, the key is transform the impedance bit by bit. In other words, multi stages impedance matching.
See here:

The product in the photo looks simple, but who knows if they do have black technology or just a liar. Two-port VNA can easily identify the performance of the power divider, even for NanoVNA. Connect RF2 to a 50 ohm load and test S21 between COM and RF1.

I also think they are probably exaggerating the parameters.

Without experience and measuring equipment you should take a different route:

“Omnidirectional” does not mean that it distributes its power in all directions: It concentrates the energy in the horizontal plane. The antenne mentioned above quadruples your radiation in all directions that might interest you. And also increases the sensitivity of your receiver.

One warning: The radiated power might be limited by law for ISM usage like this. These antennas increase your radiated power as it is measured in the maximum direction.