I’m still pretty new here and learning the ropes, but now that I feel like I’ve got the hang of things, decided to put together a fully self-sustaining battery/solar relay node.
I work in the IoT space, so I was able to hack and re-use a lot removed from service gear(0 cost to me) we had lying around. It’s not as “ninja” as some of the other compact setups, but hoping it could be something more permanent. Parts list are: enclosure, antennas, RTU logic board(re-using solely for the solar charge controller circuit), (2) 9amp hr 12v batteries in parallel(18AH total) and a 10watt solar panel. I bought a cheap buck controller to convert my 12-14v system to a steady 5v out for the radio.
The nubby antenna is for LTE, but does cover the 915mhz range… however its probably less than ideal long term. I’d like to get something more suitable such as a yagi or bigger whip antenna. It’s going to go on a 4 story rooftop near me for now. I have a pipe flange mounted to the bottom of the enclosure so I can set a metal 2 3/8" pipe in the ground to mount the box and solar panel - hopefully it can go in the wild somewhere on the nearby hills on a more permanent basis. Hoping to get some testing in with it soon! 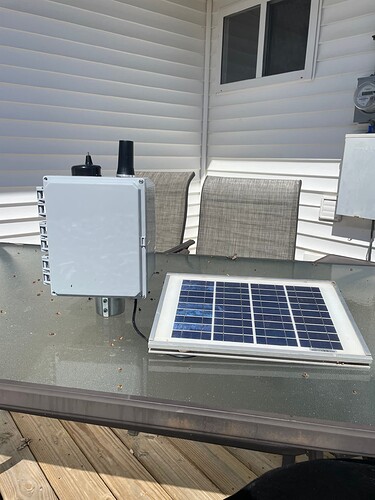 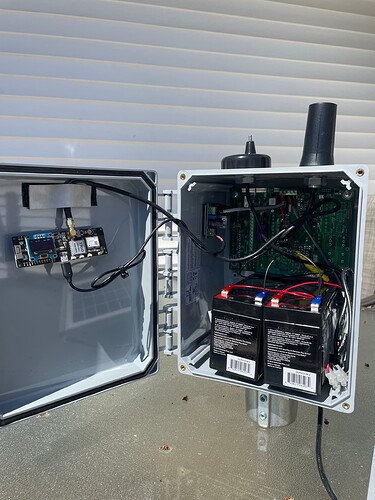 VERY NICE setup. I would recommend buying an external omnidirectional antenna and mounting it up high or on your house. You will get much greater distance out of your setup.

Thanks. I actually just installed it on top of a 4 story building in the downtown area of my hometown today, but forgot to take pics! I will have to grab some when I can.
Also, I 100% want some better antennas and open to input. I’ve been researching but everyone seems to be building antennas and frankly, I just want to buy something off the shelf that is already tuned to 915. Do you have recommendations? I’d like to try a yagi and omni. My goal is to put an additional node on the rooftop of my work office which is also about 4 stories tall and across the river in another town. I’m hoping to get these nodes about 6miles apart to talk

Here’s a pic of the install. 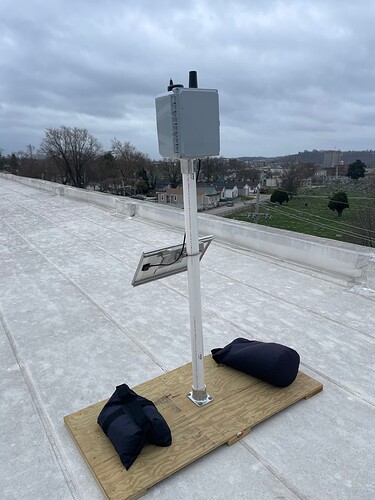 Thats a neat setup there and I’m definiteley planning to deploy some similar relays.

At work we are using Kerlink omnidirectional antennas and we are pretty happy with them for our LoRaWAN deployments, maybe they are something for you.

Thanks for the suggestion, I ended up buying two of these Omni’s yesterday. I think I did look at the brand you mentioned at some point. They do all look similar.

Also got one of these yagi’s

I got my new Omni antennas in today (link in previous post above) and got it installed. I haven’t done much testing, but I can already tell much faster cycle times between message sending and ACK return from some places that were spotty coverage before. Looking forward to testing out the other antennas ~6 miles away across the river in the city. 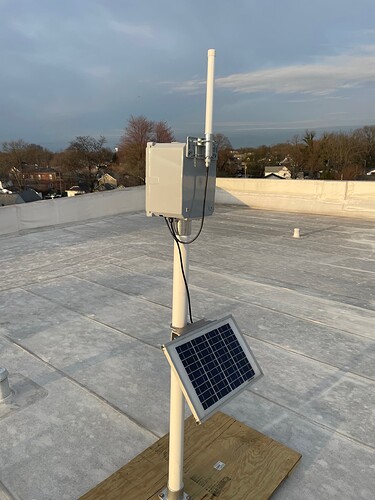 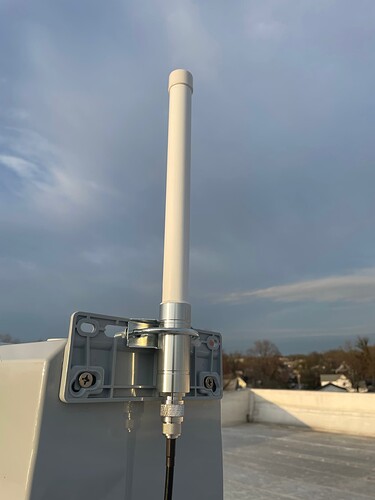 Thank for sharing, I am looking for something similar to do my area.

Did you test it yet? What is the coverage area ? indoor / outdoors ? if you dont mind post all hardware you use so this way we can replicate when need …

Honestly, I haven’t been able to do much testing yet, but there is definitely an improvement, but hard to quantify without doing a proper range test again (which I will do). The rooftop node/relay is about 1.5miles from my house. Indoors with a radio in the window (ground level), I can pick up about a 15% signal. Before it was a 0% and pretty spotty. I haven’t had success testing across the river - I’ve been advertising as about 6 miles, but its actually around 5. I had to move the solar node on the roof because it didn’t have LOS to the other radio. Still need more testing there, but weather has been poor. Overall this has become a bit of a personal and for work R&D experiment to understand capabilities of LoRa.

As far as parts go… This isn’t a cheap setup - without being able to get salvage stuff from work I would have done something cheaper.

Thank you for reply, i am looking forward to see your result i try something with just basic hardware i cant seem go more than 2700ft with 1 node inside car 1 node inside building. i am waiting for solar panel + battery bank combo to arrived to roof test … i got 2 brand from amazon both go bad so quick …