The world is stabilizing!

The updated iOS app should be in Test Flight now and the new Android app to support 1.3.21 out very shortly. 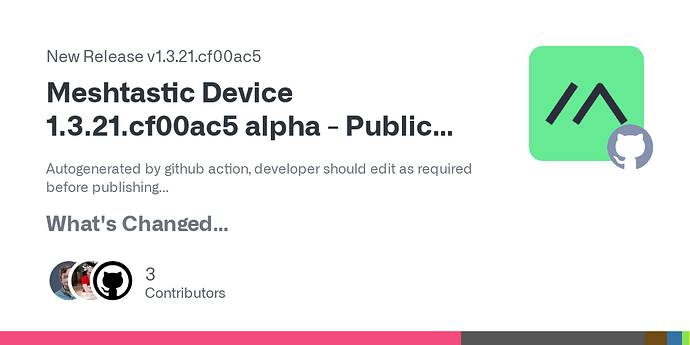 Autogenerated by github action, developer should edit as required before publishing... What's Changed Update EInkDisplay2.cpp for M5 CoreInk by @markbirss in #1524 M5Stack CoreInk Pins_Arduino.h b...

I have installed this on my 2 x TBeam now. 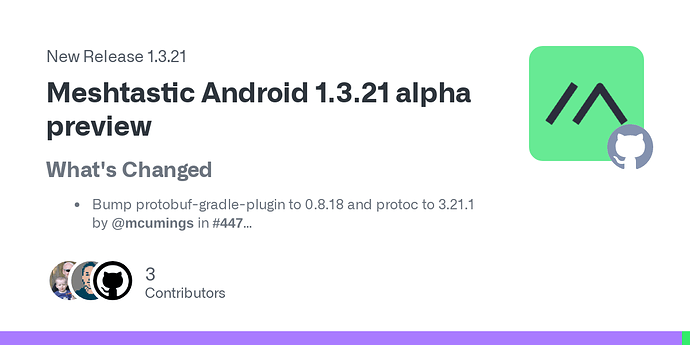 Setup on both Android devices:

The list of Bluetooth devices seemed longer than usual, with several MAC addresses rather than names appearing. There was no Meshtastic device listed at all. My usual ‘Meshtastic_AC40’ appeared as ‘AC40_AC40’, and ‘Meshtastic_1320’ appeared as ‘1320_1320’.

Android device 1 with Tbeam AC40 worked as usual. It seemed to hang at ‘Pairing completed, starting service’…until the phone went to sleep. Waking the phone brought me back to Meshtastic with the device correctly paired.

The channel name screen was blank as usual. So I rebooted the Tbeam. It did not automatically reconnect. I manually reconnected it through the Meshtastic app. Then it appeared to be working properly.

With this pair there was nothing in the Bluetooth device list (within Meshtastic) which could have been Meshtastic. I rebooted the Tbeam and then it appeared (as ‘1320_1320’).

The channel name wasn’t populated/ editable so I rebooted the Tbeam a second time.

I am now able to send messages from TBeam AC40 to TBeam 1320 and they show in the app with a notification. They take approximately 4 seconds to appear. (I’m using Long-Fast-I). No tick ever appears on the Android device attached to AC40 though.

None of the messages I send from Tbeam 1320 to AC40 ever send. They have all got a line through them. 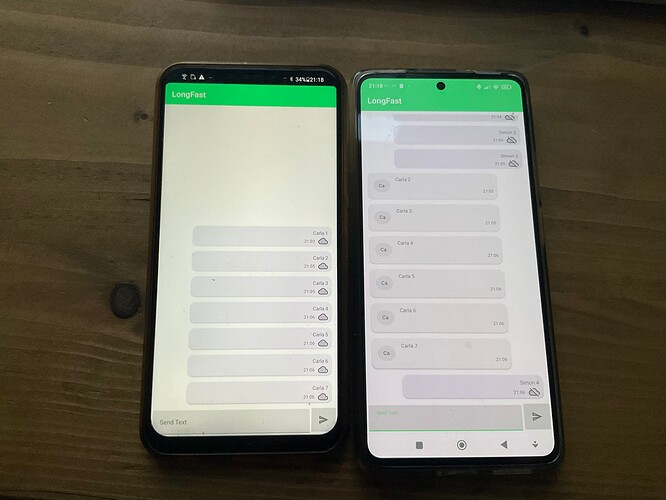 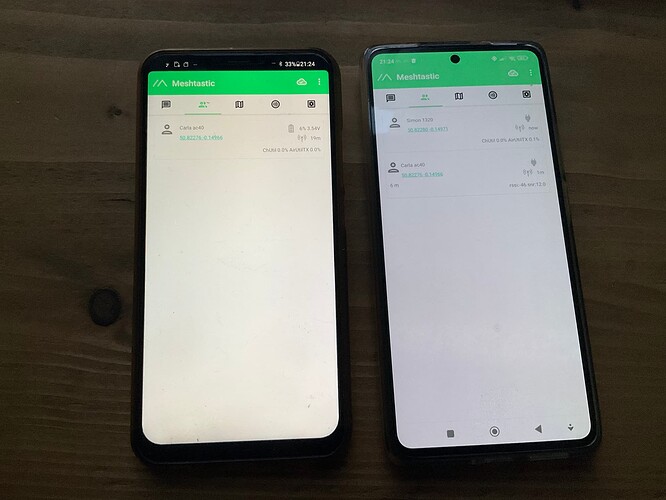 It does have working lora and device config

Do you have any idea what might cause me to get one way communication only? Is it something I’m doing wrong?

Has anyone else seen this issue?

Please describe this further. How can we reproduce this?

I described it in detail above, with photos.

How close are the devices? Even a yard of distance can help. Right next to each other in the same room is a generally bad testing experience.

I have seen this too with earlier 1.3.x versions. I am going update my TBeams and IOS/Android apps and check again. If I still get the one-way communication, I will provide some additional details.

Great! Latest IOS version is 1.3.20 and the firmware & android app are 1.3.21, correct? I’m still having the one-way communication issue.

When looking at the channel on the Android app, the options are blank, and the Lock, Reset, Scan buttons don’t respond. The only thing that responds is the Share link in the lower right corner. 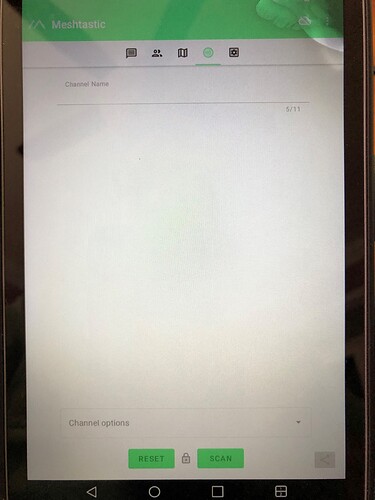 Android can send a message and receive an acknowledgement tick in approximately 14 seconds. The message shows on the other Tbeam’s screen. BUT the message does not show in the iOS app.

Sending a message from the iOS app, does nothing. (It doesn’t show on the screen of the other Tbeam, doesn’t get any ack tick and doesn’t show in the Android app.

On Android I had to reboot the Tbeam a couple of times to get it to show up as a Bluetooth device/ connect to it.

When looking at the channel on the Android app, the options are blank, and the Lock, Reset, Scan buttons don’t respond. The only thing that responds is the Share link in the lower right corner.

You may be able to solve that by rebooting that Tbeam.

The screen is populated correctly for me, but I still get exactly the same results as you. One way communications only - and not showing in the app, only on one of the Tbeams.

Thanks. Interesting… I had rebooted the Tbeam and tablet several times yesterday, but still that screen was still blank/non-responsive. I just tried again this morning and now it does show the QR code and the lock/reset/scan buttons are working.
It’s an old Android tablet running v6 of the operating system, so it’s not the best testing device. Unfortunately, it’s the only Android device I own. If nobody else sees that issue, then I’d write it off to an old incompatible device - although it worked flawlessly with Meshtastic 1.2.x

I also get that issue on my 2 up-to-date Android devices. I have to reboot the T-Beam to get that screen to show correctly.

Sounds like you need to delete and re-install the app. There are instructions in the test flight for clearing the database (uninstall app) and removing BLE pairing under settings > Bluetooth

Yes, every time there is an app or firmware update, I delete the app and even remove and reinstall test flight. I also delete the device from the Bluetooth settings on the phone/tablet, and on each TBeam, double press the middle button followed by a triple press to clear the Bluetooth cache. Let me know if there is anything else I should be doing. Thanks!

I just did everything again from the beginning. Deleted both apps, deleted Bluetooth devices, cleared the Bluetooth cache on the Tbeams then started again.

I get exactly the same results.