Diving into this rabbit hole, need some insight on use case

Just wanted to say hi to everyone on here, I am completely new to all of this and wanted to ask a couple questions and get some insight from those that are already experimenting/using this tech. I’ve been going through some threads on here and have found some useful info that have sparked even more excitement into this project, such as making a solar powered node. I have also checked out disaster.radio and have found that very interesting also and am in between which one to start with. Disaster.radio provides an equipment guide on what to purchase of a solar node also.

I have read and watched various videos regarding the range of these devices. Some say they have made line of sight communication between nodes from 1-3 miles away all the way up to roughly 60. For my specific use case (as of right now) I want to communicated with someone who is roughly 12 miles away as the crow flies. I am at approximately 800 feet above sea level and the other person is approximately 1300 feet, also need to consider the fact we have a ridge in between us at approximately 1200 ft. The plan of attack after doing a little reading was to get a node up and running using solar and an 18650 battery inside a waterproof container to place in approximately 2100ft to make an attempt at allowing the devices to communicated with each other.

Ultimately we would like to have 10-15 of these nodes up and running using various people so we could create a network to talk and communicate incase of a down grid, or just simply because its fun and we can. I do like the fact you can turn GPS on and off with the Meshtastic because I can see some utility to it but also am not fond of giving away GPS location haphazardly.

Any thoughts or advice is appreciated.

Edit: Also wanted to know if anyone has experience leaving leaving the boards and batteries out in the cold/heat. We can have sub zero winters and 90 degree summers here.

I have a router node up a hill, solar powered. Just an 18650 running a ttgo tlora v1 and a 500ma 5v solar panel from aliexpress. It works ok, no GPS on it which doesn’t really matter, my mobile nodes all have that anyway.

I have been duct taping it to a fence line at about 1500ft, near the highest point on the farm I work on, and I really makes a big difference.

Moving forward, I probably will need to either reduce power consumption somewhat (don’t know how), or add a couple extra batteries because it doesn’t really have enough to get through more than a few murky days.

Still tinkering with it though, I’ve bought it down from the ridge today for software updates and to change some channel settings to try out a shorter range but higher bit rate channel. 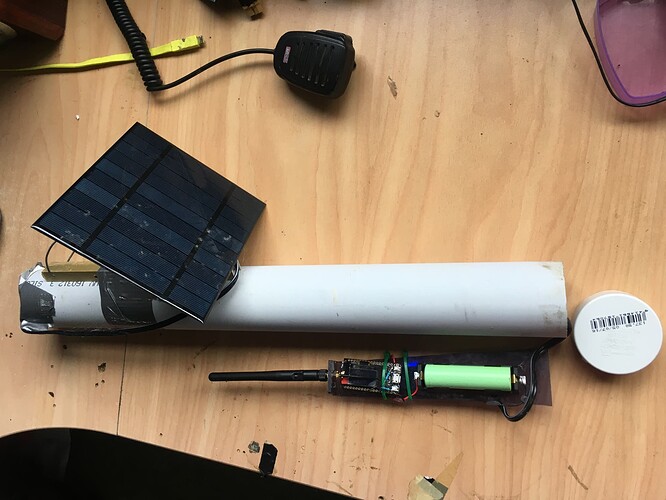 Thanks for the reply. That is a type of setup that I was thinking of. I have seen a few threads were people talk about different sleep modes that you can use to help with battery life. Maybe that is something to look into. I hope the changes give you an increase in performance.

You might find this thread interesting in regards to increasing run time for those cloudy days using a few 18650s.

It turns out I hadn’t enabled is_router. Between that and latest firmware it’s used 20% battery overnight which is just fine

what model hardware did you use?

Its just a TTGO TLora v1, I got 2 of them a few years ago to try out and meshtastic works fine on them. No GPS but it doesn’t matter for a dumb relay node - my gateway node at the house is a tbeam with GPS so it can provide time to the mesh.

Just keep in mind that a GPS can be added to a TLORA V1 board. Each of mine has one attached working just fine.

I ended up ordering two of the V1.1 Tbeam. Awaiting their arrival now. Pretty excited for setup.

Lots of topics here for you to explore.

If temperatures go below zero a user has shared a great example of a supper capacitor powered relay node.

Another option for sub freezing temperatures is having an oversized L-ion battery bank and charging it really, really, slowly . Different battery chemistries have different requirements and risks. If you are not sure assume a battery charged in sub freezing temps is a fire risk.

Thank you for the insight. I’ll try and find the example of the super capacitor powered relay node because that sounds like what I am looking for.

for now, router mode is just a power setting. there is no difference on how a router handles packets compared to other nodes.

So does that mean that every “router” simply receives all messages and re-broadcasts all that it receives such that the router node doesn’t have to be on the same “channel” and the receiving node tied to the phone or other device then decodes the message for display?

all nodes handle packets the same way (until 1.3 comes out). every node on the same frequency and radio settings will attempt retransmission after receiving a packet.