A friend and I got our radios and Android apps working for the first time yesterday. I was parked outside his house at the time. Hours later when I was home I saw the attached display on my radio. “2.3 km” (agrees with Google Earth), “Signal: 0%”, and “5 hours ago” all make sense. But the direction from my house to his is southwest, not southeast. Am I misunderstanding or is this a defect? I am using firmware 1.2.52 and Android app 1.2.50. 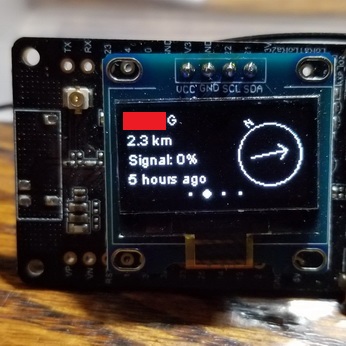 There’s no hardware compass built into the device, so the compass on the display is based on the heading between two gps points and is most accurate while in motion.

Thanks for the quick response. But I am saying the direction arrow relative to the “N” north indicator is incorrect (not anything to do with the orientation of the “circle and N” relative to the display). With the N indicator as shown, the arrow points southeast. My friend’s house is southwest from my house. All this depends only on our GPS coordinates, that seem correct due to the “2.3 km” being correct.

I’ve been using the exact same setup as you for about a week now and the arrow relative to the North indicator has never shown the correct direction except for perhaps once by coincidence. Very frustrating as my hope was to use these for locating and reconnecting with family members in an emergency and possibly for finding my vehicle if stolen. I also notice that the GPS location does not update reliably and also often shows hundreds of meters apart despite the units being next to each other for hours. I at first suspected poorly matched GPS antennas causing the GPSs to struggle with updates as the GPS fix LEDs rarely flash, however I’ve gotten fixes in difficult locations (such as in the basement) so I can’t imagine it struggling continuously outside in the open as well. I think the randomness of the fix LED is a bug too as I get location updates and good satellites in use counts when it is not flashing. This is the same behavior across all of my nodes.

Oh…Also, the North position indicator does not seem to work either, which may be the root of the problem. Even when I am well in motion (for instance driving down the hi-way) it does not show proper direction. I presume it is supposed to work by putting the N toward the top of the display if I am traveling North and toward the bottom of the the display if I am traveling South etc.

I filed this in GitHub as a firmware issue.

The direction arrow on the Meshtastic radio display is in error. https://meshta…stic.discourse.group/t/direction-arrow-seems-incorrect/5027 gives all details. **Screenshots** See the forum link for an image. **Device info:** See the forum post.

I just wanted to mention that the arrow does indicate the direction of the other nodes referred to my position, except that the North is exactly in the opposite direction compared to what’s on the screen. If you switch the N with S, than it actually seem to work fine (for me at least)

Where are you on the globe?

I am in Alberta. I will do more experimenting to see if what Mihai is experiencing is happening in my case or if I can pick up on any other pattern.

Thanks for submitting this to Github Rick!

Where are you on the globe?

Thanks. Just making sure we’re not seeing an issue with math involving the hemisphere.

I’m in Romania, so Northern Hemisphere…

Issue replication: Someone with 2 Meshtastic devices can use the python “meshtastic” program and a USB connection to the radios to set two known GPS locations and see how each radio displays the location of the other. I only have one Meshtastic radio. To try approximately my original test case (because I no longer have the exact data):

So I have a node that actually sees 5 different nodes within the city (using external antenna). The nodes are generally many kilometers apart.
What I did was starting up a sixth node and manually configured three different locations (coordinates), then looking at the arrow on the display in each case.
Conclusion is the following: The arrow indicates the direction for all the nodes, but the “N” (north) letter is exactly at the opposite side of the circle. If you replace it with “S” letter it would be perfect

This was exactly my previous feeling so now it’s demonstrated

The arrow indicates the direction for all the nodes, but the “N” (north) letter is exactly at the opposite side of the circle.

Thank you for your reply Mihai, but that would not explain the issue that started the conversation. The error there is about 90 degrees, not 180.

The first reply from MC hamster is your answer.

Thanks garth, but what follows the first reply from MC hamster explains why it doesn’t seem to be the answer.

The picture on the table leads me to believe it was not in motion.

(Motion is necessary to get the “N” pointed in the up direction on the display, but that not the issue here. The issue is that the direction of the arrow relative to the “N” is incorrect.)