Range test with TTGO LORA32 v1 And some Balloons

Not sure how this is gonna to turn out, as with most projects get into there’s road block. Always something simple for example looking out the window to see the weather. Im guessing rain and gravity worked differently in 1752 when one could fly a kite in a storm. Gone are those days i guess. Specs. TTGO LORA32 v1 2000mAh lipo baggy, Tape, and obviously balloons, about 12 more than calculated, weighing in at 56grams not including balloon and ribbon weight. So ill post more after lift off. I maybe getting another tank. Due to float time is only 5 to 7 hours and we still have 4 to 6 hours of this crap weather. 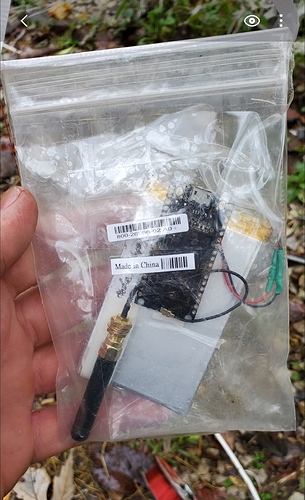 You may want to try and arrange things so the antenna is not next to any other components, like the battery in the image.

Im not sure if its true, but I have heard from an aquaintance in a lab that the helium for balloons is a different concentration then helium you would get from a lab. This might account for the unexpected requirement for the additional ballons. As far as I understand helium is a limitted resource so it would make sense to “water down” the bottle to give just enough lift for a party device vs the bottle used in the lab.

If this doesnt work out, perhaps contact your local supplier to see if you can fill a couple of ballons.

Once those balloons reach about 10kms up, they might pop, so if there is very little wind and its directly above you, that might be your limit.

Looking forward to the results either way.

Edit; Not sure if you can shave a few grams of by using a very light weight fishing line?

Just something to consider … the irradiation pattern coming out of the antenna resembles that of a doughnut with the antenna as the center of the doughnut.

That means that to get the designed performance of an antenna, you will want the flat side of the antenna facing down and you want your receiver to be directly under it.

Can’t wait to hear about how this works out!

I was wondering about this as well. Would you also have to mimic the placement of the antenna on the ground too? Ie have both antennas placed horizontal? Otherwise you have changed the polarization if 1 is vertical and 1 horizontal?

As far as I understan

You are correct, The Party Helium only 80% Something I did not realize at the time. Thanks for your input… probably a better route to go… If the helium bought was the same as the helium filled in stores it would be a good deal… but its not so its not… The reason for my testing is cause I’m considering getting antenna tower, so ill be mostly driving around town with it 100-200’ but at the end its ill be sending it high weather is still crappy so maybe better luck tomorrow.
Thanks again for the input… cant wait to get this up hints the premature Launch Attempt.

!!! YES!!! Thanks!!! the excitement got the best of me… probably would look worse if i admitted to being a Ham radio operator… Antenna should have been first… instead i started filling balloons prematurely…
Thanks MC

i am using fishing line for the tag line. its was difficulty tying the fishing line on to the balloons so i opted for the ribbon… but ill use fishing line throughout tomorrow… weather permitting… ill be taking your advice and getting the balloons filled… Than the leftover helium in the take will just be added Umff i guess… or a night of Chipmunk karaoke… lol joking defiantly not advised…

Ill try to come up with a different configuration that hopefully doesn’t add Much/Any weight that will keep the antenna away from the components, also better antenna placement in general. as noted by MC…
Thanks for the advice Spor

If you know roughly how long the test will last perhaps a smaller battery. Im not sure of the specs of the one you are using but it looks like a monster. And maybe overkill for the afternoon test

It was the smallest I had laying around, 2000mAh. My original thought was… its gonna be up for a couple days. But that dream was shot down. Before I even had then balloons filled lol

So I’m going with a weather balloon not a crazy expensive one the wind is just to strong the higher u go… obviously to keep the balloons tied. Without some short of net around em… so the ttgo is now sacrificial im not getting this back lol my question is where can I find a guide for wiring up a GPS module I have laying around. And would elevation be possible without needing to putting a telemetry setup on it (wrong choice of words I think) lol and if I use a computer can I log a constant ping for location? This is turning into a non practical experiment. Straight up could yield interesting results. But sending it to space isn’t making much sense considering we have a good idea of line of sight range.
My original experiment was to set it up and different heights 100’ 200’ 300’ etc and log the distance around town. Lol.

Underfill a couple of balloons so that when the main ones burst the underfilled ones slow the descent.

This is a great track prediction site https://predict.habhub.org/

You stand a great chance of getting it back if you plan!

Was this test completed?