For SMA to SMA, I’m using these plus a silone o-ring: 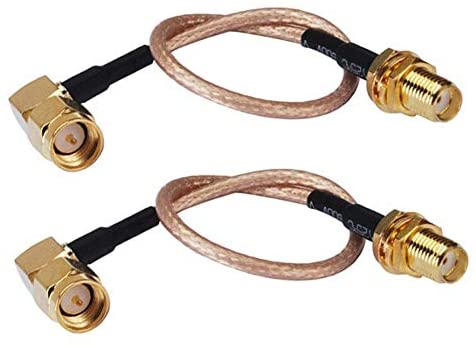 For SMA to N connector for commercial high-gain antennas, these are already weatherproof:

Regarding the lack of USB on the smaller case, I’m just waiting on some more panel-mount USB extensions to come in. This time, I’m going to use Type C connectors because I think they’re more robust than Micro USB. In the field, it’s more convenient to use the same cable as my phone and not to worry about about inserting it upside down.

I ordered several of these weatherproof USB type C connectors from China: 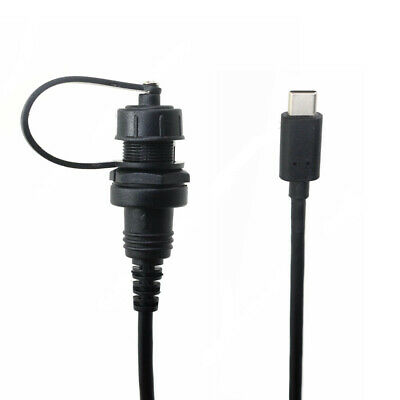 USB 3.1 Type-C Panel Mount Connector IP67 Waterproof Cable USB C Type C Male to Female Extension cord cables Water Proof. You may also like. If you receive wrong item or do not satisfied with our item.


and several of these right angle Micro USB to Type C adapters: 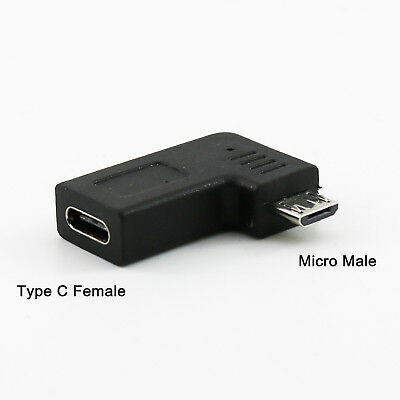 As for the antennas, this is the SMA antenna I’m using for the portable unit. I haven’t had a chance to thoroughly compare it against other antennas yet, but I think the 5 dBi gain spec is a lie. To me, it looks like the usual half-wave sleeve dipole, which has a 2.7 dBi gain, but it’s still better than the one that came with the T-Beam.
https://www.amazon.com/gp/product/B07HLKKHCM

For stationary nodes, it really depends on where and how you’re mounting it. For temporary setups or if you’re mounting the enclosure itself to something, it’s most convenient to use an antenna with a N-Male connector that directly screws into the connector on top.
https://www.amazon.com/gp/product/B085S84J7R

If you’re mounting to a mast, sometimes it’s easiest to use an antenna that comes with a pole mount. They all seem to have female connectors, but you can use a use a male-to-male adapter and just let the enclosure hang from it.
https://www.amazon.com/Altelix-6dBi-Antenna-N-Female-Connector/dp/B07DHVWMWP

For either one, if they’re permanently installed outdoors, be sure to weatherproof the connector with self-amalgamating tape, or something similar. Don’t just use vinyl electrical tape, that won’t keep water out, but once the connector gets wet, electrical tape will trap some of the water inside causing it to corrode. Ask me how I know…

The units I ordered from aliexpress arrived in translucent snap cases. definitely not waterproof, but certainly able hold the board with a battery installed. You will have to drill a hole for the antenna… I’ll try to take some pics later.

My T-Beams don’t have the SMA on the edge. I think they may squeeze in here. The XXL is 44mm inside diameter, and the XL is 33mm. The Lora32 board might sneak in smaller sizes depending on the battery. 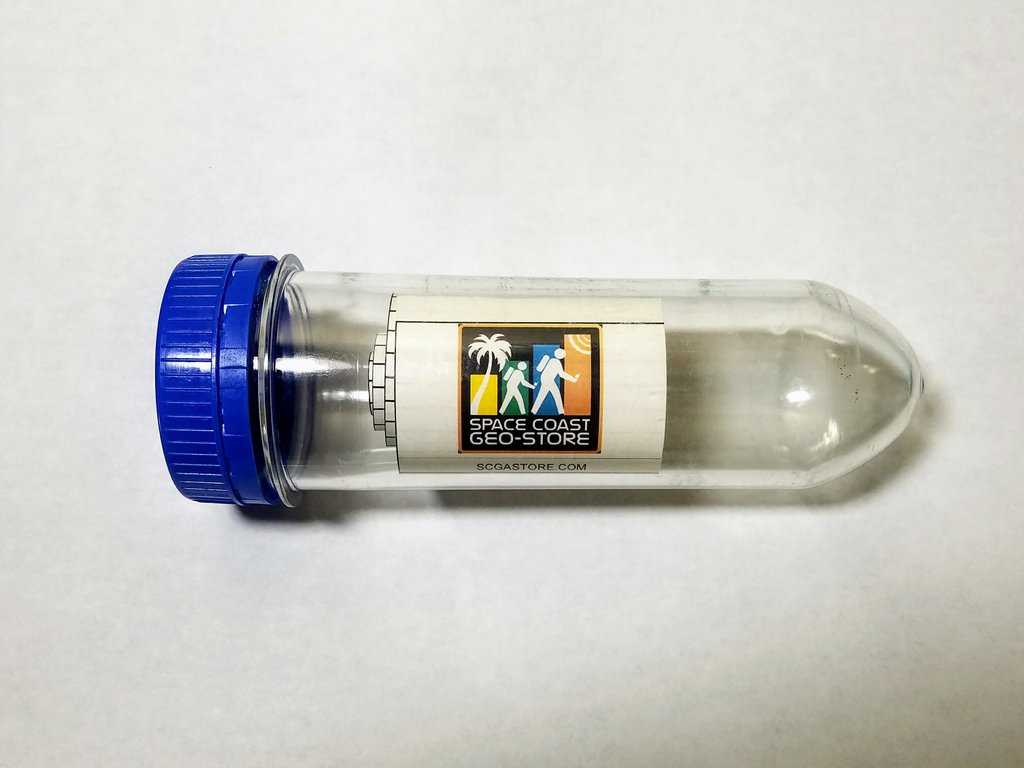 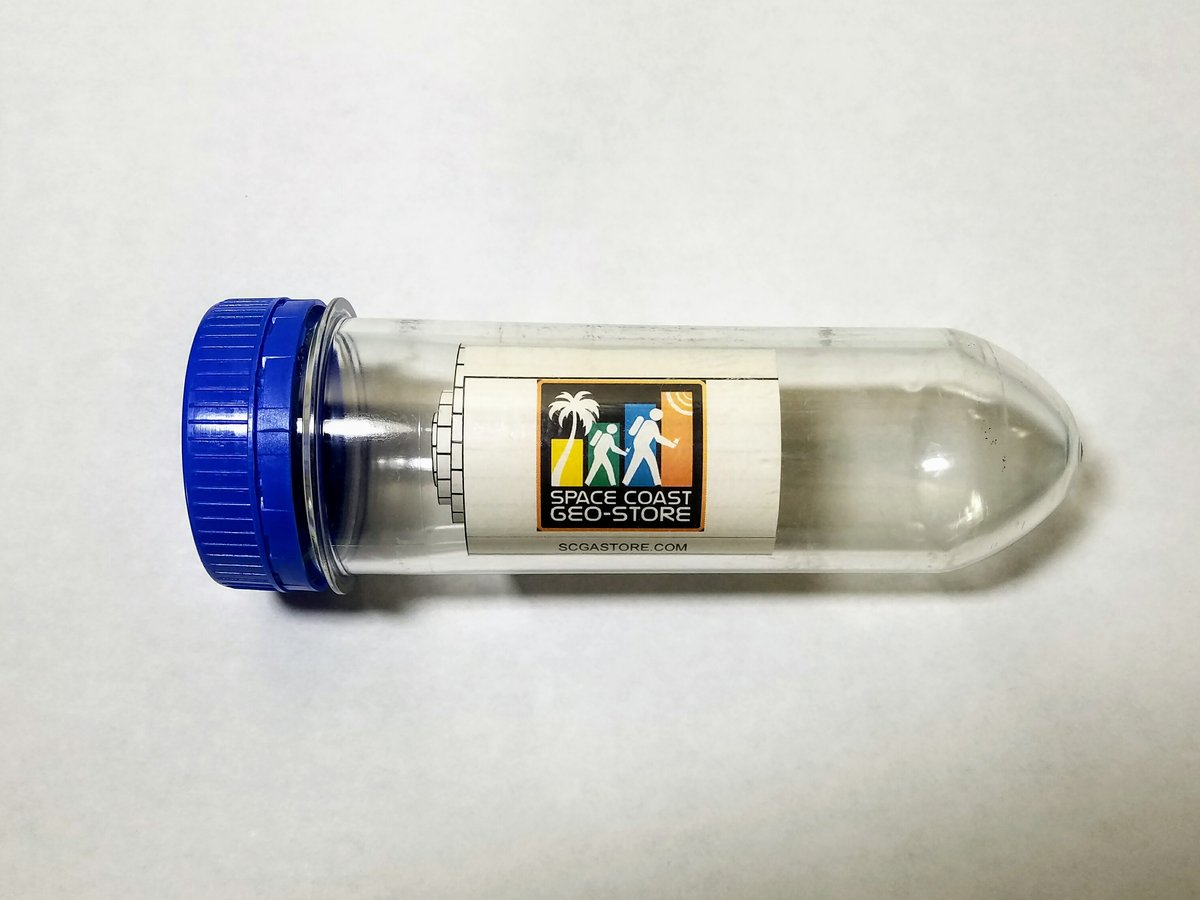 XXL size PET preform containers are the early stage of a large 5L water bottle. BUT in this condition as it is now, this extremely durable and completely Waterproof, Crush proof, Survival Tube can be used in GEOCACHING as containers also! This... 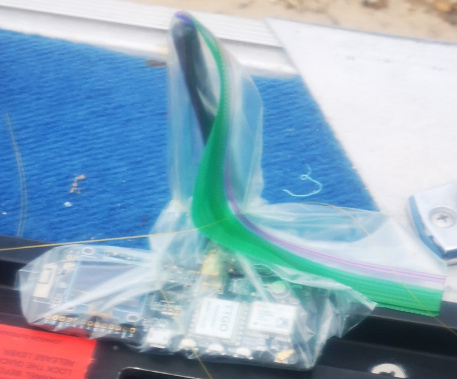 damn… you have it trademarked as well

If you don’t mind making a few peanut butter and jelly sandwiches, Then tbeam with side sma antenna fits inside and is ‘mostly’ waterproof. 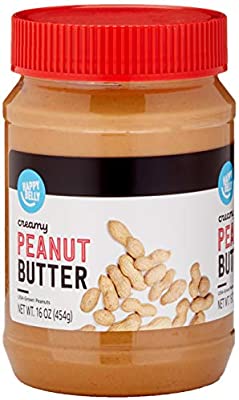 The iSpindel Open Source wireless hydrometer project is using those tubes to house ESP8266s while floating them in fermentation vessels for weeks. Not a terrible test case for water resistance. They have a similar form factor, including 18650 on the back. 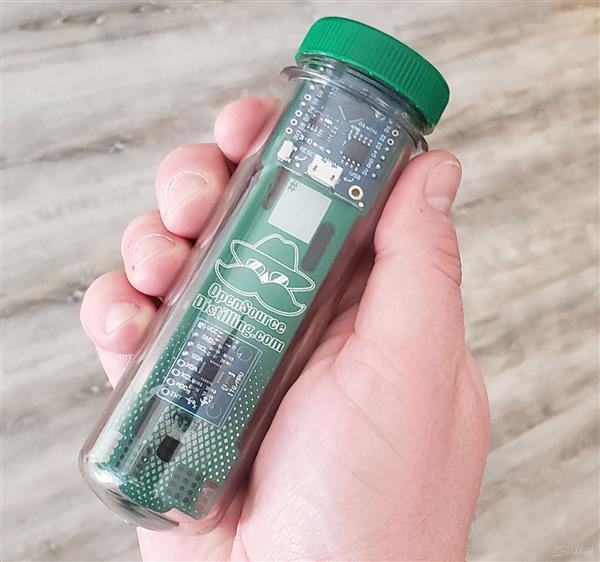 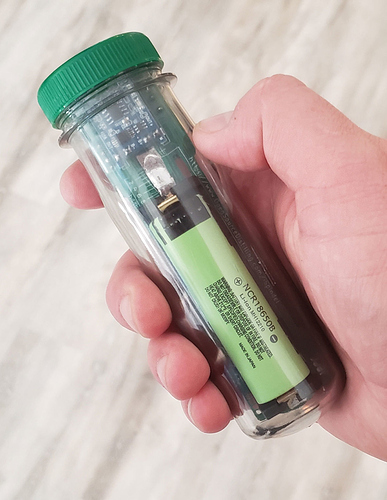 I believe that’s a Ubiquiti Bullet in the pic, but there are other models out there. 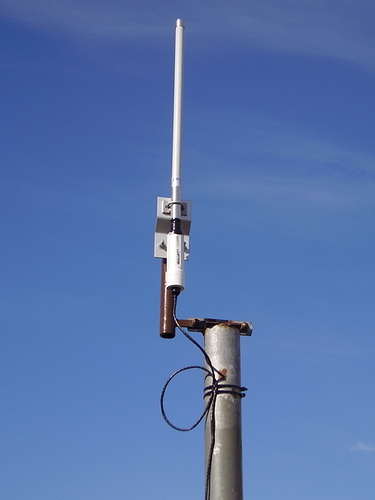 I have an ALFA Tube-2H that’s very similar, that I happened to fry during some soldering adventure I now forget.

The T-Beam doesn’t fit, but the Lora32 does. 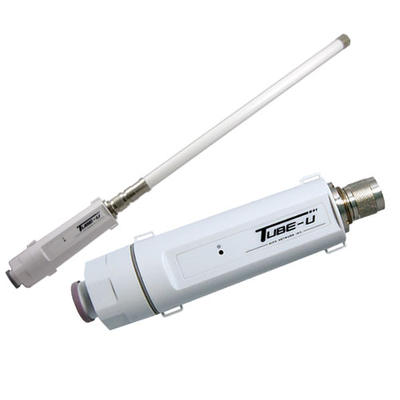 I wonder if those plastic shells aren’t avaiable off-the-shelf for a couple bucks somewhere. I think they’re IP67. They’re set up for 2.4ghz, but the configuration looks standard enough to easily swap out for LoRa antennas.

They’re also typically POE, which has some applications in base stations.

This is the case the T-BEAM arrived in from aliexpress. I drilled a hole for the antenna. 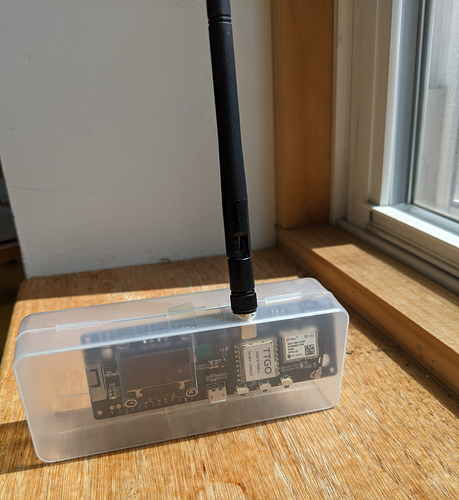 haha, I did this too. This was pretty cheap.

I ordered a junction box from Amazon. I’ll let you know how that goes. I want to be able to deploy my second unit for several days in outdoor locations.

The small bottle are available
in XL size, may not fit because of the 3 buttons and USB port: https://www.ebay.ca/itm/5-XL-BIG-PET-Micro-Geocaching-container-geocache-Petling-preform-soda-bottle/132379354446
in XXL size fit but not with the current antenna: https://www.ebay.ca/itm/5-pcs-XXL-set-of-BIG-PET-Micro-Geocaching-container-geocache-preform-Soda-bottle/132379354252

I modified the case like Ride33Comfy did but completely not waterproof

Yup. The USB plug is what prevents the T-Beam from fitting in the wifi tube. I thought about repositioning it, but I’ll probably ruin the board with my current soldering skills.

I ordered XL and XXL for a test. They shipped yesterday. The eBay seller says 5 weeks shipping to US for to Covid, so I ordered from the link I posted above.

For the T-Beam to fit the XL, it would probably require using a heat gun to slightly warp the tube. That probably will prevent the cap from fitting properly though.

My prediction is the T-Beam will end up in the XXL, and the Lora32 in the XL.

I have this one. The version with the SMA on the side would require another approach, of course. 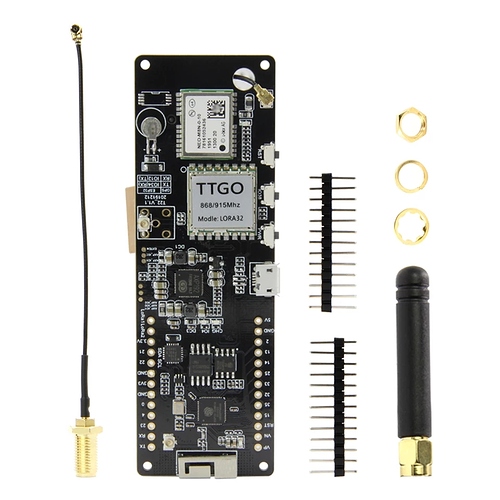 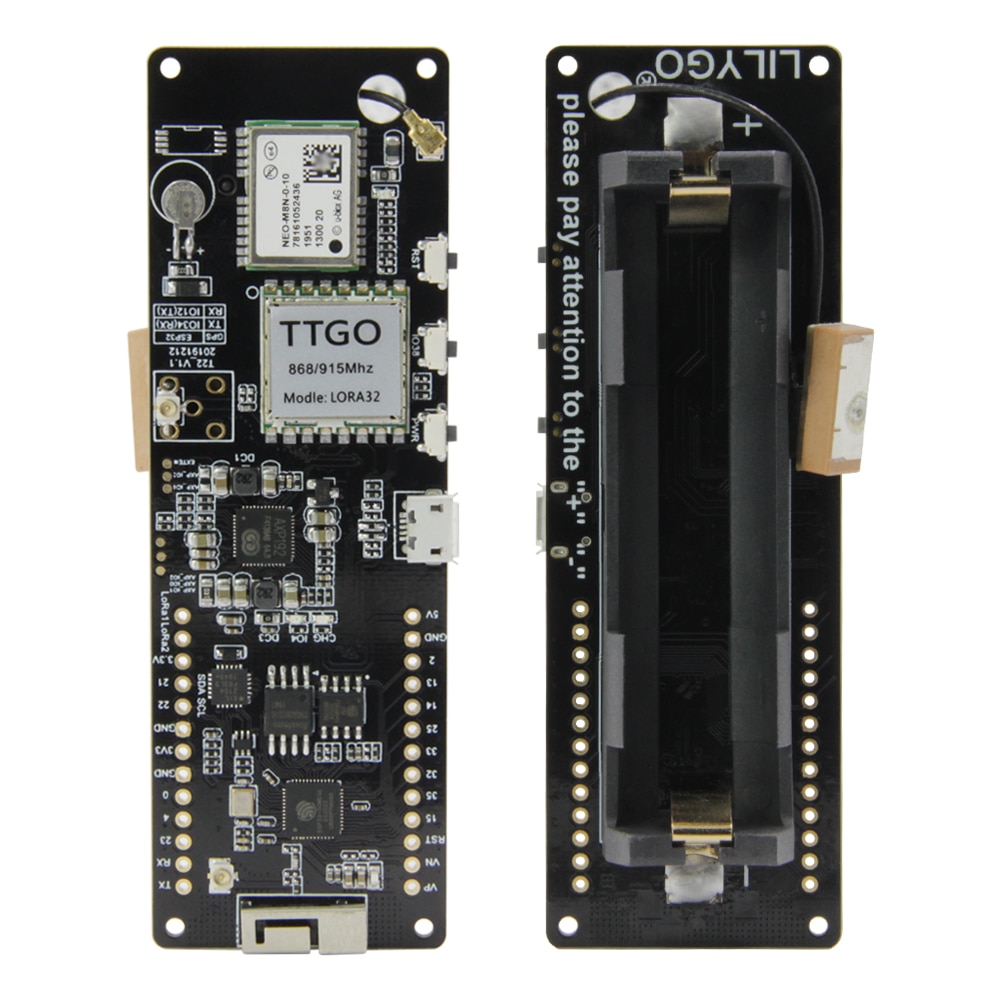 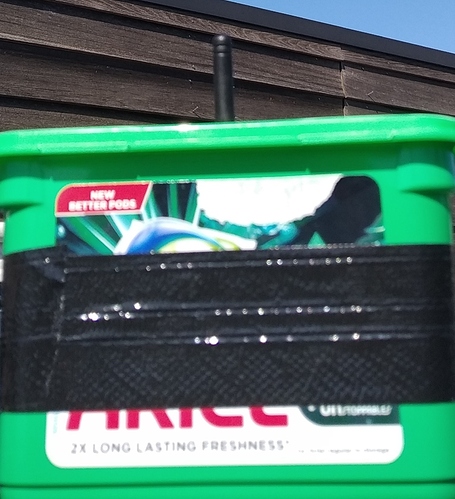 new OLED: note the GND and VCC are flipped!!!

Also note the pictures on most of the t-beams for sale on aliexpress are not correct in defining the header holes… see how pins 22 and 21 are wrong order and the DCDC1 is mislabeled. 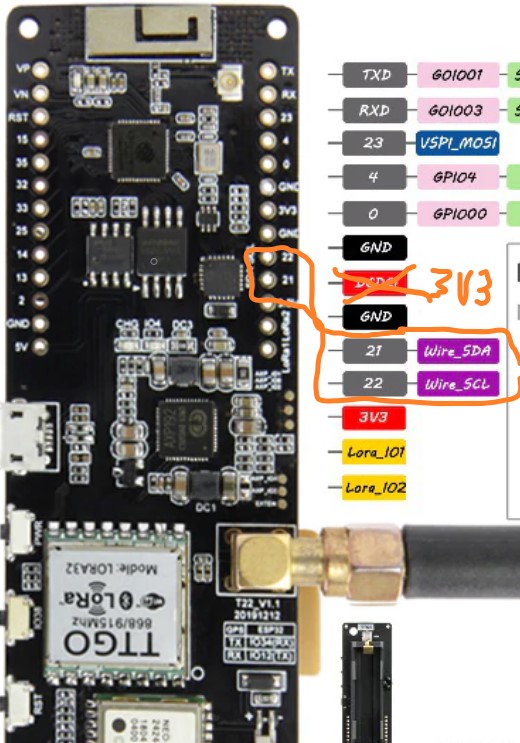 Edit 8/25: The picture has been corrected on aliexpress

You can also swap the 0 ohm resistors on the oled to swap the polarity of the pins. See here. https://github.com/meshtastic/Meshtastic-device/wiki/Hardware-Information#tt-go-t-beam

@dafeman thank you for the link to the wiki page. That was good reminder. swapping the 0 ohm resistors is a great recommendation. Since I am not too good with surface mount components, a 0 ohm could just be a little piece of wire jumper or solder bridge. I tend to ‘destroy’ most surface mount components when I try to unsolder them.