We’re getting close! Can you feel it?

Reminder: This is not for the faint of heart. You will likely have problems. More information on how to use this:

Meshtastic 1.3 is currently highly experimental. While we believe that it's stable-ish, 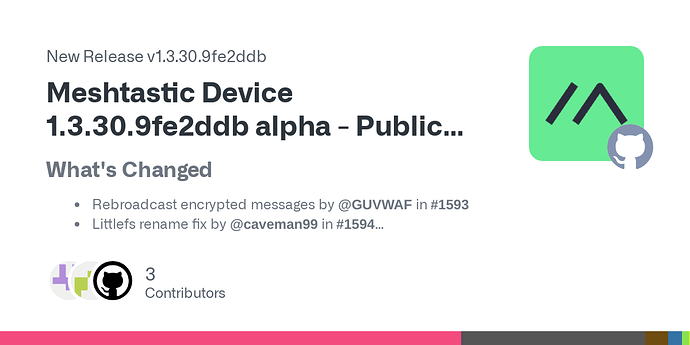 I was able to get it connected to MQTT, now lets test…

Presently, this seems to have bricked all of my T-Beams…

Since installing this FW I can’t get any of them to turn on. External power doesn’t bring them to life, nor pressing any of the buttons.

What is the version of TBeams you have as the newer ones are based on AXP19x and this one will turn power on regardless of ESP32 FW. AFAIR, it has its own LED

Really hard to brick an esp32, are you sure the 1.1 firmware installed?

All four of my T-Beams are now dead.

There are two tbeam hardware variant firmware files 1.1 and .7

I get one way messaging, as before.

From iOS the messages are sent, show up on the opposite T-Beam’s screen and show in the Android app.

There is no ACK in the iOS app.

Messages in the other direction, Android to iOS, don’t send (get a cloud with a line through it), don’t show up on the opposite tbeam and don’t show in the iOS app.

With two Android devices I get the following behaviour:

Sending messages from either device shows on the opposite T-Beam’s screen - but never shows in the Android app.

There is no ACK transmitted back - so messages never get a tick icon.

What could cause this?

Range tested to 2.2km from my dining table on the first floor - with me walking down the seafront/ promenade. I’m pretty happy with that.

Now I will order some different antennas and see if I can push things further.

Does anyone know what power output the latest firmware uses when in 868 MHz mode? I know a couple of us found that it was permissible to use 500 mW but I wonder if that change was actually made? (Assuming a T-Beam can even output 500 mW?)

(It’s a shame 1.3.38 came out the day after Boomtown Festival. Meshtaastic would have been ideal for that! The cell networks were completely maxed out, SMS/ WhatsApp message were taking hours to get through. If I had had working Meshtastic there it would have been awesome! Ah well, there’s always next year!)