I want to make a car tracker against theft

My car is kept on the street outside my home. Parking is difficult, so it could be 100m down the road each way, so I’d like to have a meshtastic device that sends its location every hour or so.

I’m thinking I can get a 12V to 5V converter and connect it to the fusebox of the car so I don’t have to worry about charging.

Presumably power usage could be kept low enough to not worry about draining the car battery and I could place it on the dash to get a decent signal.

I’d then put another device in my window and connect to a raspberry pi that can notify me somehow if the car disappears.

Anyone tried anything like this or use a device for long term location monitoring with low energy usage?

notify me somehow if the car disappears.

Isn’t to late already when it disappeared?

Better than finding out the next day!

Once its gone, you hope they get as far away with it as possible. Since it will likely be damaged… you hope for a right off

Maybe instead of it be a location based alert, it can be an event triggered alert. In this case, if your car alarm goes off or anything else like the dome light comes on, it will send you a text message that the car is being messed with.

That’ll hopefully give you time to get to your car before it drives off or before the contents is pilfered.

This sounds like it would be a useful generic feature, i.e. some form of geo-fencing or proximity measure of other nodes to the user’s nodes would allow:

This could at least trigger a message or alert on the phone. Maybe also a good MQTT event trigger. I’d see this being easier for the user manage on the phone than on the mesh device, so a good enhancement request for the app.

I don’t anticipate this to be a super effective solution! It’s just nice to know the car is still there without having to go down the road and check. We’ve been in lockdown for a long while here, so sometimes it goes days without being used and I wouldn’t want to discover days later that the car disappeared.

It would also be nice to automatically keep track of how often we use the car and how long it’s normally away for. As well as how far away it can keep a signal, which I imagine won’t be far in this urban environment.

Agree with @qurm though, this could be a cool generic feature. Another example would be tracking pets.

Has anyone run a TTGO device off a car battery for any period of time?

Given that the TTGo can sleep for most of the time, there will be very little draw on the car battery.

Thats not to say a car that is parked for a month wont suffer a dead battery, but I think most peoples after market command starts draw more current just keeping the relay energized (~200mA) to disable the ignition switch.

I think using a combination of existing sensors like the door switches (or as Mc- said the dome light) and adding an accelerometer as triggers for an immediate update would be best. Maybe you could hide a button that if not pressed within 60 seconds of getting in the car starts a frequent location transmit, and a more urgent alert on your other device. It could also aid law enforcement in tracking down your car. If they have an idea of the route and time are car took they could also check traffic cameras and may be able to get a photo of the unauthorized driver.

What you want actually has a lot in common with people that want to track live stock.

I’ve brought it up several times (and will likely do so again), what you want to do (and the live stock people) will benefit greatly from the location features being refactored into a plugin that provides an API for other plugins to use. There has already been a fair amount of discussion on a sensor plugin but I’m not sure what progress has been made. The alert plugin has already be created so you have a great starting point on the notification receiving side of things.

If this is something you really want, and soon, maybe think about talking with others regarding features that share different use cases and start documentation how they might work as an individual feature / building block so it is easer for a developer to step in and start working on it. I’ve personally been thinking of starting a spreadsheet of Features/Functions on one side and use cases on the other. It could become a great resource for deterring what goes in to the next major version.

The plugin I’m working on now takes use of quite a bit of location features. Soon as that’s done, it can be used as a reference for anyone else on how to work with the location as a plugin. It works with location of both the local devices and remote nodes.

If your looking at using the dome light in the vehicle, you can use an optocoupler to trigger the input.

Optocouplers create an electric isolation between the cars electrics and your lower voltage electronics. They have prebuilt boards, or you can buy the chips seperately and make your own.

I would like to share my “car relay” experiment. It can also be used to track a car, even if it is not my primary purpose.

I have one T-beam installed by a window in the boot of the car, where a 12v plug is located.
I have 3D printed a basic support that I clip to the car, connected to the enclosure designed by @B8B8 (very sturdy and elegant design, by the way; let down by my elastic bands!). 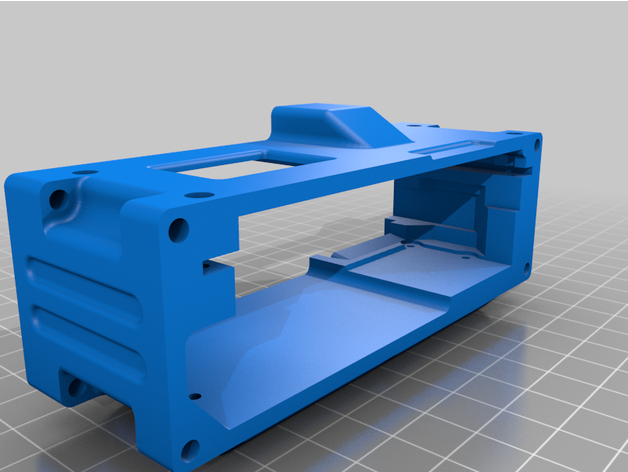 Case for a TTGO T-Beam I made for use with the Meshtastic project. https://www.meshtastic.org/https://github.com/meshtastic Version 1.1 Base updated to use "Nut plate" to hold 1/4"-20 tripod mount in place instead of glue M2x8mm socket head cap screw... 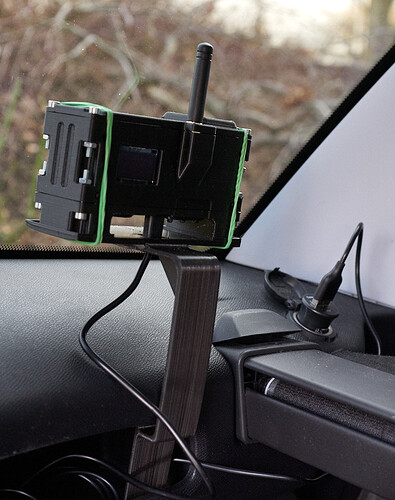 It is powered by a 3400 mAh 18650 cell, and I am using one of the better GPS antennas suggested in the forum.
My T-beams run with the Long range(but slower) setting, and on this one I have only made the following changes:
–set position_broadcast_secs 120
–set is_low_power true

I happened to have in the boot a Nitecore LR50 lantern / power bank (2 x 18650), so I am using it as a “buffer”.
The 12v plug is energised only when the car is running, so I charge the LR50 when I use the car, and it charges the T-Beam battery when the engine is off. I need to play with the charge current limit setting to see if I can get better efficiency. 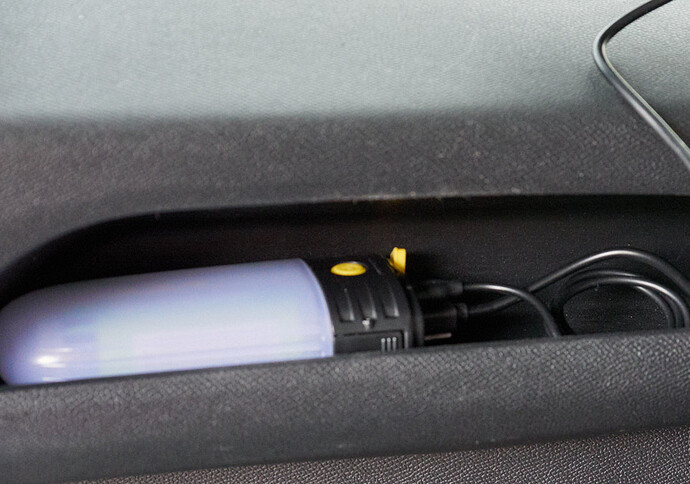 The T-beam is not very visible from the outside of the car, and GPS lock has been good so far.
It has run like this for more than a week with limited use of the car (only a few short trips) and the T-beam battery is still fully charged.

I still have to do some proper range testing. I guess it will dependent highly on orientation, as it is located at the edge of a big Faraday cage!