Good to know, just checked and I have a 0.6.8 on my phone! Will try the freshly backed

It’s crazy how fast this development goes on here! Congratulations!

I was able to pair both of my nodes (one via display, the other one python meshtastic to show pairing code) with both phones via the internal bluetooth. They are present in my paired device and should be “ready to use” by the app. 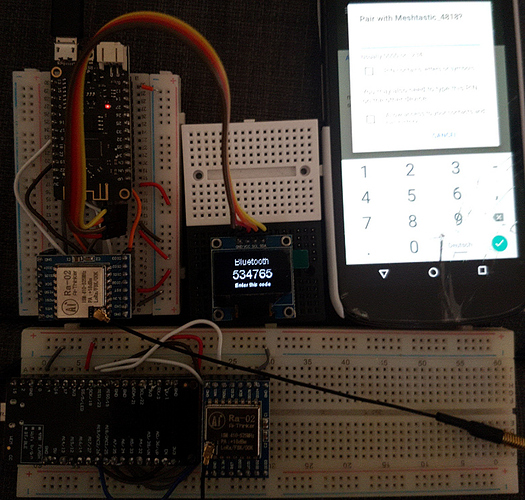 But still when I have the meshtastic android app open it just says (on both android devices!): 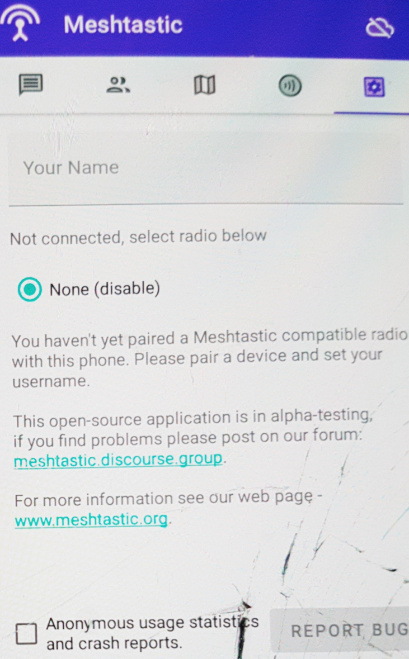 it looks a little better than with the last version (0.6.8) which just never stopped with a loading animation.

Indeed. Location services is always off

When I turn it on I can indeed see on one of my phones (Android 7.1) a list with the two meshtastic-devices with bluetooth in the app. But even if I select them I am not able to choose a user name. The note on top of the list is ether “Not connected, select radio below” or something that the device is a sleep now. 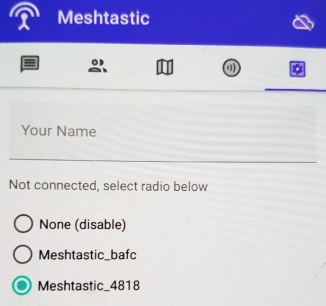 On the same phone I also tried via usb OTG which also get’s detected inside the app but the same as with bluetooth I can’t choose a username after selecting the device (/dev/bus/usb…). Message is also “Not connected, select radio below”.

And my Test with the other Android (8.1) phones: With bluetooth I were not able to get the list of device inside the meshtastic app (paired in android already) but I had success with usb OTG! If I choose it from the list I can then type a username and start the chat

how are you programming your custom esp32 boards? using platform io? can you first do a complete erase of the esp32 using esptool?

Some ESP32s are shipped with malformatted flash which makes the ESP32 system code be unable to save BLE shared keys (generated during pairing).

how are you programming your custom esp32 boards? using platform io?

Yes, I cloned the meshtastic-device and just changed the platformio.ini to the right frequency. For the Lolin32 Lite board I also needed to lower the baud rate to be able to flash it. Beside that I just used the heltec profile and that’s it.

can you first do a complete erase of the esp32 using esptool?

I did this already for the lolin32 lite because I had troubles flashing in the beginning.

I will try to get hold on another android device to test the meshtastic app on there.

I would like to create a micro mesh network to test new Meshtastic functions (mainly audio and OTR messaging). Would it be possible to use the cheap $3 SX1278 (E19) or nrf52840 and a ESP8266?

ESP8266 is not supported at all. nrf52 is not officially supported - still very pre alpha (but it will build). If it were me, I’d just buy a few of the alterady supported boards. Yes - you can make it work on a one-off custom board, but it is a fair amount of work.

yes - This can be done through the settings. Currently only the python tool has a user interface for it though. I’ll add a task for the android app to give full settings access. But it will be a couple of weeksish.

The supported hardware costs around $30, considering I need at least 4 nodes it is quite a huge investment for testing.
I was suggesting to create an ultra-cheap hardware especially for this purpose.

ok - whatever hardware you want to make work, I’m happy to help if you have questions.

Thanks for your support, I think developing a cheaper alternative will positively impact the community.
What are the problems in porting meshtastic to low-end uC like Arduino nano or the ESP8266/ESP32?

The software already works on ESP32.

Arduino (i.e. AVR CPUs) doesn’t have enough RAM or flash, so I don’t think that would be a good fit.

You could port it to ESP8266 I bet. And that would be a fine project for a one-off board (and I’d eagerly merge back the code and make it a supported platform). But for any board you make more than 10 of, the cost of the CPU is not a big part of the final price (and the price difference between a ESP32 and ESP8266 I bet is less than a $1). So personally, I’m not super interested in trying to save that dollar (in exchange for a lot of extra software work)

Then why were you saying an ESP32 with a basic LoRa transceiver wouldn’t work?
Surely there is no point in porting the code to the ESP8266 if the ESP32 is already supported, the advantages of having higher specs and multithreading are definitely worth the few dollars difference.

I was more referring to creating a barebone cheap node for network tests.

yes - This can be done through the settings. Currently only the python tool has a user interface for it though. I’ll add a task for the android app to give full settings access. But it will be a couple of weeksish

Can you give me a hint how to do this with the python tool? I tried with ‘meshtastic -h’ but didn’t find any useful command for this

Hi Is this a hardware option?

It uses the STM32L073 micro-controller and the SX1276 LoRa which is not the 1278 mentioned previously. I like the idea that these are already in cases which makes use in the field much better. My use mode is to have 4 out in the field that do not need to receive messages (but can extend the range by relaying them) but other units should be able to track them

Talking to a Chinese supplier, they suggested to use the SX1268 as it is the newer version of the SX1278 with higher range and better thermal design for outdoor usage.