Consistency issues with the Mesh

What firmware is on your devices?

There is a 1.2 build in test flight for another 45 days

This time we didn’t go so crazy and boondock them. We took them to a very small fair. Lots of obstructions but it was the equivlent to a 2 lane highway about 1/4 mile. So i downgraded the apps to the 1.2 and same thing. All devices show different nodes and locations. Any other ideas? 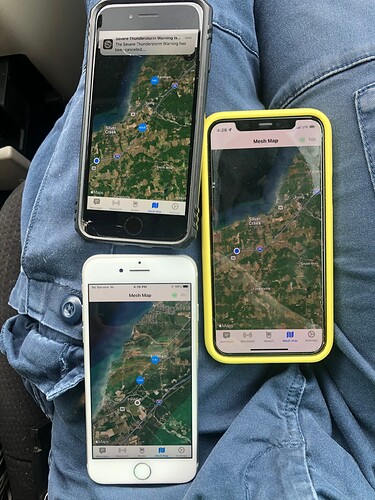 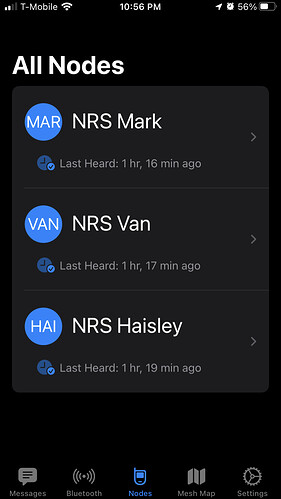 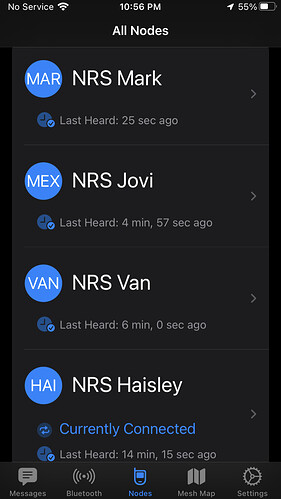 I am not sure what you are expecting to see, everything looks fine.

Shouldn’t I see all 5 on all 3 devices? Both locations and nodes? In this case I got three on one, four on the other and zero on the third.

I kind of thought channel issue so I have added a secondary. Changed channel name and number. I seen other posts about adding a second channel can cause problems. This is all default. I flashed it and changed the sleep time, owner name and cranked up the GPS broadcast. The PSK, channel name, channel number is default.

Has each device sent a message while in the presence of the other?

If you have a new node and just turn it on it will not populate each of the other devices on the list until you send a message with them at least once.

At least that has been my experience so far.

That’s a great theory! I haven’t sent any messages with them. The picture I sent before, the phone with the yellow case doesn’t have any nodes on the screen. Send that node yellow case node a message and it should work…. I like it. I like this project. I’ve been into radio both professionally and geek for 25 years. I’ve learned a lot the past 6 months I’ve had these things. You guys are great with the help. I’ll let you know. I was about to put them on eBay.

You guys are great. Both you kb9nate and loodydo have brought up great topics. I thought I wrapped my head around this pretty good but I learned something new here. Ponder this. If I were to ch-set id 1212 --ch-index 0 would I be the only person utilizing said channel? Would this cut out other packs from other nodes?

Why did you turn off smart broadcast? What is your goal with more frequent GPS updates if the node has not moved?

I have noticed that some users, myself included, have been increasing the update interval (sometimes far too high for the default channel) to aid in exploring range and evaluating mesh performance.

Before I had any experience with meshtastic and LoRa I had my 5 nodes set to send messages every minute which quickly bump the channel utilization into unstable levels.

This discrete-event simulation is a great way to see how frequent updates can really cloud a mesh-based network. Smart position broadcast is the right solution for real world use and the range test plugin is best for testing.

The reason for turning up the broadcast and turning off smart was to get to know the GPS and how it acts. I had all the values defaulted and had some problems so I started over and changed things as needed. A faster broadcast of the GPS was needed. If I was running these in real world I’d keep the smart position on. I’m not to concerned with their range as much as the GPS and the overall performance.

Next time I’m out with these I’m going to turn everything default and send messages to get them to populate. We’ll see if that doesn’t clear up the problem.

For 1.3 using the range testing plugin (set a sender or two and don’t worry about the save yet as there is no way to get the file) and telemetry to create mesh activity without affecting the core functionality has been working well for me. Turning up position updates without movement is weird in testing. We did find today that when smart position is off empty position packets get sent sometimes, which could clear nodes from the map.

@garth you mentioned “empty position packets get sent sometimes”, which sounds like a bug to me, and a bug which has the potential to mess up things pretty bad.

Turn off the smart broadcast and crank up the GPS update interval and you are have introduced confusing behavior. Smart position by its nature requires that the GPS have a position, using an interval does not.

With 1.3 and range test and telemetry working nicely, if you want to create a lot of mesh activity with any device you can turn up the device telemetry updates to 15 seconds and use the range test from an ESP32 to create messages. This is a much more reliable way to test and revert then messing with position features.

This module allows you to test the range of your Meshtastic nodes. It requires at least two nodes, a sender and a receiver. The receiving node then saves the messages along with the GPS coordinates at which they were received into a .csv file. This...