Can lora nodes be put into stationary/repeater mode like gotennas can?

I have a couple I’m waiting on shipping for myself (I also have 2 864’s, but I’m in the US). Does anybody know of other recommended models that can be had more quickly here in the US?

btw: I think electrically the 915 and 864 boards are identical. The only thing the change is which antenna they include with it. So for initial short range testing I bet you could use an 864 board (with their not quite right length antenna) and run it at 915.

Can confirm. The first two T-Beams I got from Aliexpress were 864 but run fine built to 915. I’ve only used them over short distances though so I’m not sure how to determine the right antenna. (anyone who can tell me would be appreciated!)

Also, has anyone designed/seen any “stealth” cases for repeater nodes? I’m out in an area where I have a few good spots I could stash a T-Beam with electricity, but I need to find a way to make it blend in so meddling kids don’t just hijack it. I’m thinking sort of a geocache, but one that won’t block an antenna. 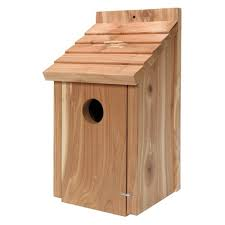 If it is not too urban, maybe modify something like this? put the electronics in a compartment on top, and as a bonus you can have actual birds living in the node.

Is there a way to share the app itself, without internet connection? Ideally from the device itself, but a share-app function via BT or wifi AP from the mobile app itself would also be good, if you need to include more people in a device (I know you are working on multi-user ID)
Also, can you add an option for fixed bluetooth pin? while security for personal devices is good fit for random pin, a public, multi user/repeater node that is physically hidden is not.

alas: distributing the app from the app, is doable but the queue of things ahead of that is pretty long.

re: not requiring pin
yep - good idea, there is a bug in for that and if no one else does it I’ll probably get to it before 1.1 is over (next three month ish)