Does anyone have a set of Motorola DTR600, DTR700, or similar 900 MHz two-way radios that could try out a rubber duck antenna like the PMAF4024?

I don’t think the RF performance would be any better than the cheap half-wave dipoles, since at 7 inches, that’s almost certainly what they are. However, I do think they’d be more rugged for those of us using hard-sided enclosures for biking, hiking, etc.

It’s worth mentioning that you can pretty much ignore the stated gain specs unless they come from established antenna companies and are backed up by reputable tests. On paper, a perfect halfwave dipole (and by extension, a quarter wave monople with a ground plane) has a gain of 2.7dBi, and real world antennas aren’t perfect. If the stated gain for a given design is higher than the theoretical calculated gain for that design, it’s a lie, plain and simple.

As for SWR, it’s important to remember that you need an SWR under 2:1 to protect the transmitter, but SWR isn’t a measurement of how well an antenna works. A 50 ohm resistor (in radio, we call it a dummy load) will have a perfect SWR of 1:1, but it’s a terrible antenna. The only way to practically tell how “good” (efficient) an antenna is is to measure it’s performance.

’Min, max and mean are calculated for RSSI, SNR and frequency error. The firmware starts in receive mode. A press on the user button will send 10 test messages, time how long it takes to send and receive the ACK, and calculate RSSI etc on the received ACK messages. You can press the user button again within the 5 second timeout to send another set of 10 test messages and have their stats combined with those of the previous set. The stats can be zeroed by holding the user button down for 1.5 seconds. Alternatively you can just reset the device.'
-
Works nicely for me. He sets the Tx power high though. I think an antenna tester should use the lowest power practical. An easy tweak.
-
Perhaps similar stats might be built into a ‘set up mode’ in later versions?
-

I really need to learn to build my own bins.

In the meantime, I’ve been using a modified version of LilyGO’s range test app, https://github.com/jasonfish/TTGO-T-Beam

For a little guidance on aerial selection: https://github.com/meshtastic/Meshtastic-device/wiki/Aerial---antenna-information---selection

Yes… It’s actually another post. I just added a message count. And weather

My take of someone else post. Sorry, I forgot who.

The script @ets354 added reminds me of one possible enhancement of the wiki files: @geeksville, how about creating a wiki page for python scripts? This could eventually grow to a valuable resource for Meshtastic users.

There could be four subtitles for each of the entries: title of the script, short description (intended usage), script with comments, and additional information (a place for output demonstrations and pictures).

Great idea. Anyone can edit and create new pages in the wiki. It could also link the 3rd party projects that are using the API.

I am going to try this half-wave antenna (https://www.aliexpress.com/item/32847434023.html ) that claims a quite unbelievable 12dbi gain. 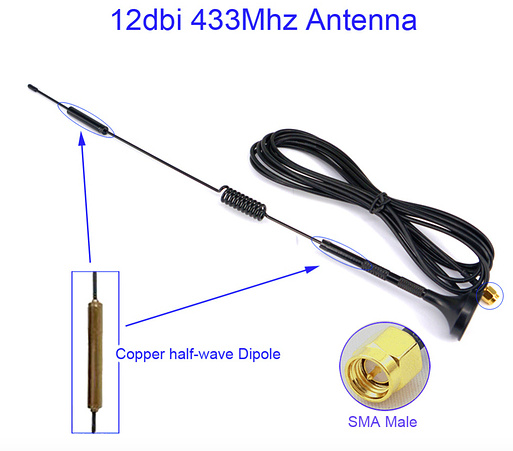 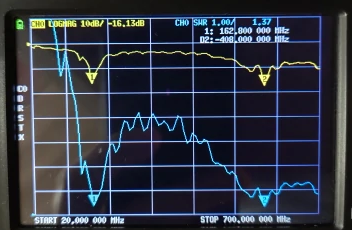 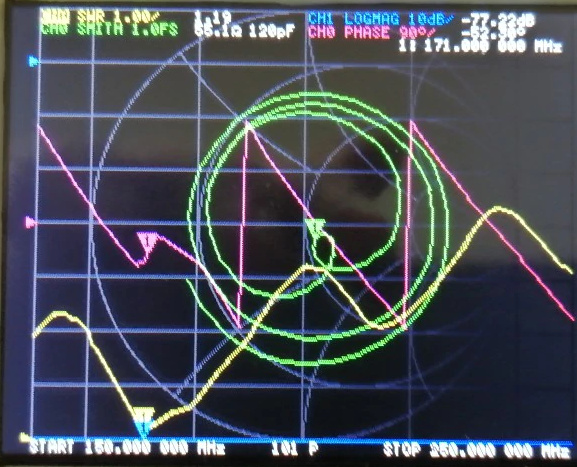 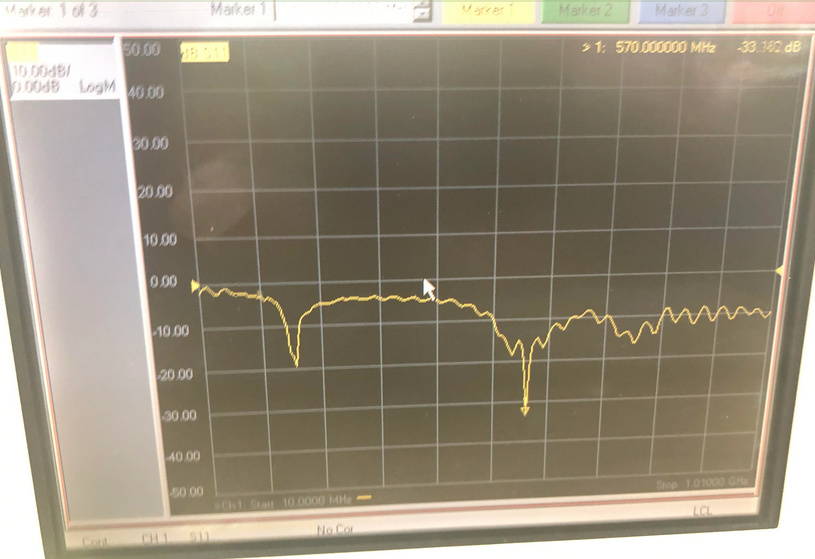 You should return it, it’s a scam. I ended up getting some eByte antennae and they work pretty ok

You should return it

This would cost me a lot (much more than the antenna itself). But I can try (and will) to make a dispute for a (at least partial) money return.

It’s quite sad because the antenna has a good (heavy) quality - but it’s just totally useless.

LoRa works wonderfully at 170 MHz. I’ve used some UART E32-170T30D 30dBm SX1278 from Ebyte for a cave link at times I wish there were better antennas available for that frequency. I let it go at the time, because they never got under VSWR of 3, but now that I know of this bad 433 MC antenna, you’re just giving me ideas to dig that project up again!

Wow, great. Beside possible regulatory issues (guess for most countries a license is needed to use 170M MHz bands) is this Ebyte UART module you link supported by meshtastic?

In theory it should have better coverage than higher bands (like 433 or 868 for example) - so it’s actually quite interesting!

Not really supported at the time, no. But quite feasible, yes.
There is no actual Meshtastic support yet for the UART module in Meshtastic, but the SPI-version of this Ebyte module (look for the S-version) should work straight after adding the 170 MC channels as for the other bands, I think.
In most European countries (a here in France), the 170 MC band contains a similar license-free telemetry portion, like the 433 & 868/915 bands do for LoRa. These are not limited by TTN frequency plans, as those are mutually respected agreements between its users. TTN are open to other frequency plan proposals. Country law are limiting total radiated power and frequency range for license-free operation in these telemetry bands.

Looks interesting are the gains for real, anyone into drones? 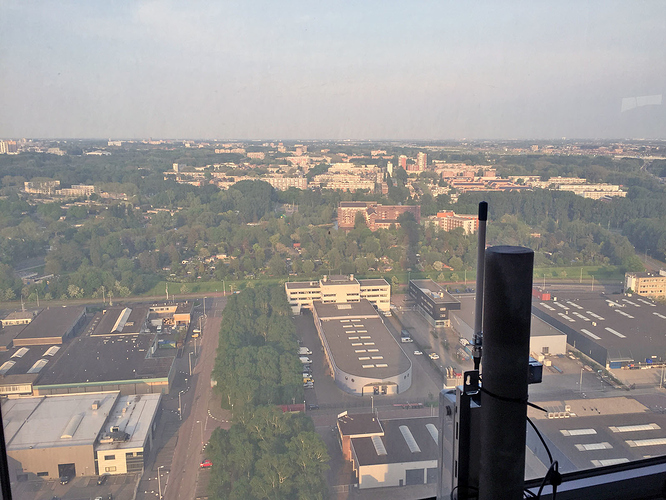 like this one, less then one euro in quantities and shipped with all kind of lora products 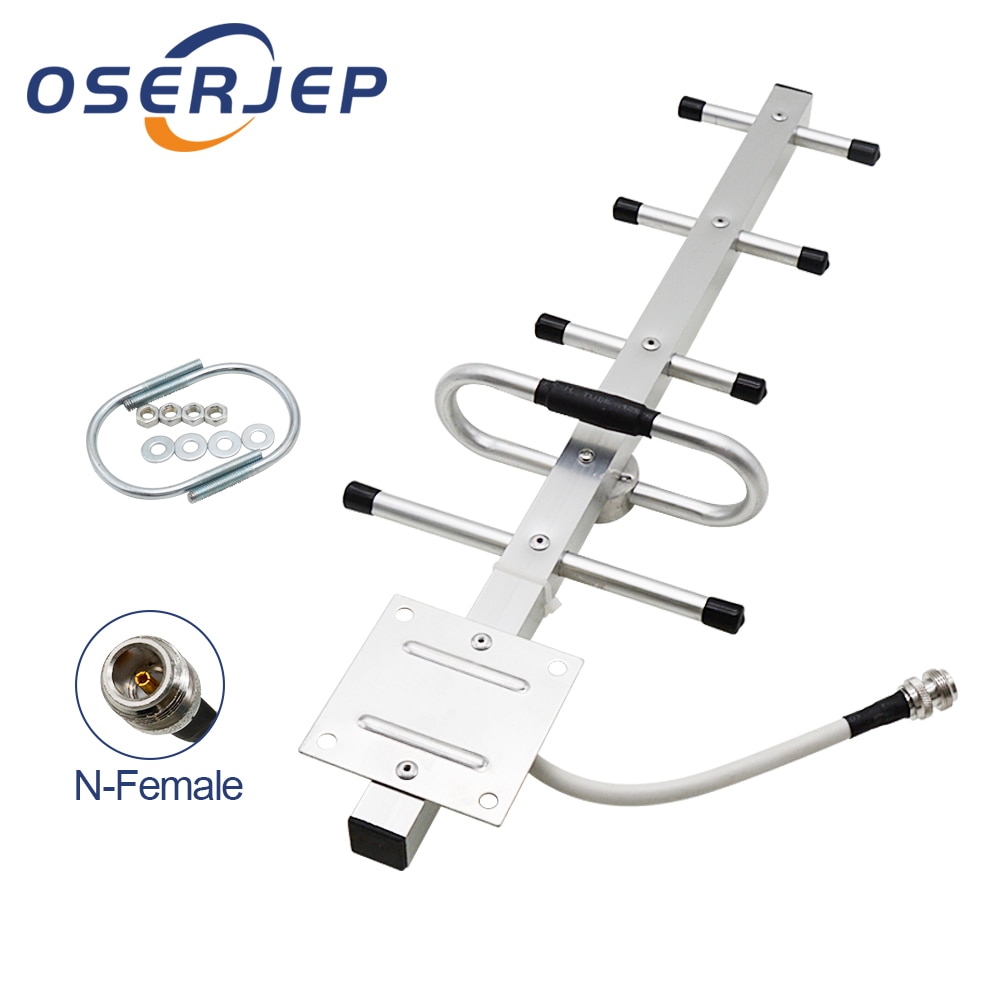 
Got me this one, delivery 11 days! Initially looking at the elements sizes and location on boom (while waiting for an N to SMA cable) they are a match for around 900Mhz. The pigtail is 22 cm.
Elements are spot welded, dipole is screwed on, pigtail not that easy to replace as there is no connector on the dipole but the cable goes straight in.Quality ok, for 6 dollar cheaper then a DIY.
The swr…! 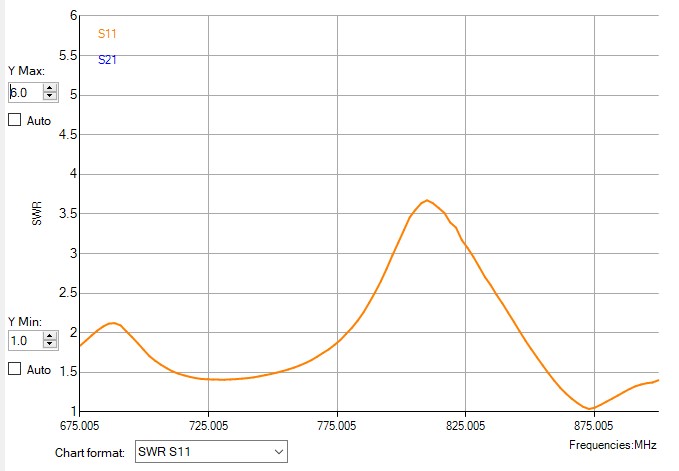 Total beam length 44cm, just about portable, will take it outside in the next days with a Tbeam and compare.
Done a few tests at ranges of around 1km, was amazed to see how much reflexted signal you get in an urban concrete area. In some locations I could just point the yagi at a large building and get a 70-80% signal. Found a location behind (50m) a fat large building that reduced the signal and with nothing to reflect around. Compared against the small stub that came with the TBeam.
Stub 30% Yagi 85%, yagi pointed with back towards signal 15%. yagi pointed sideways 0%
Once the rssi and autoreply option is in the app/firmware will do more (long range) tests.
3 Likes
biged October 7, 2020, 3:03am #89 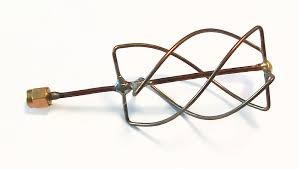 uploading this antenna that can made a stationary antenna 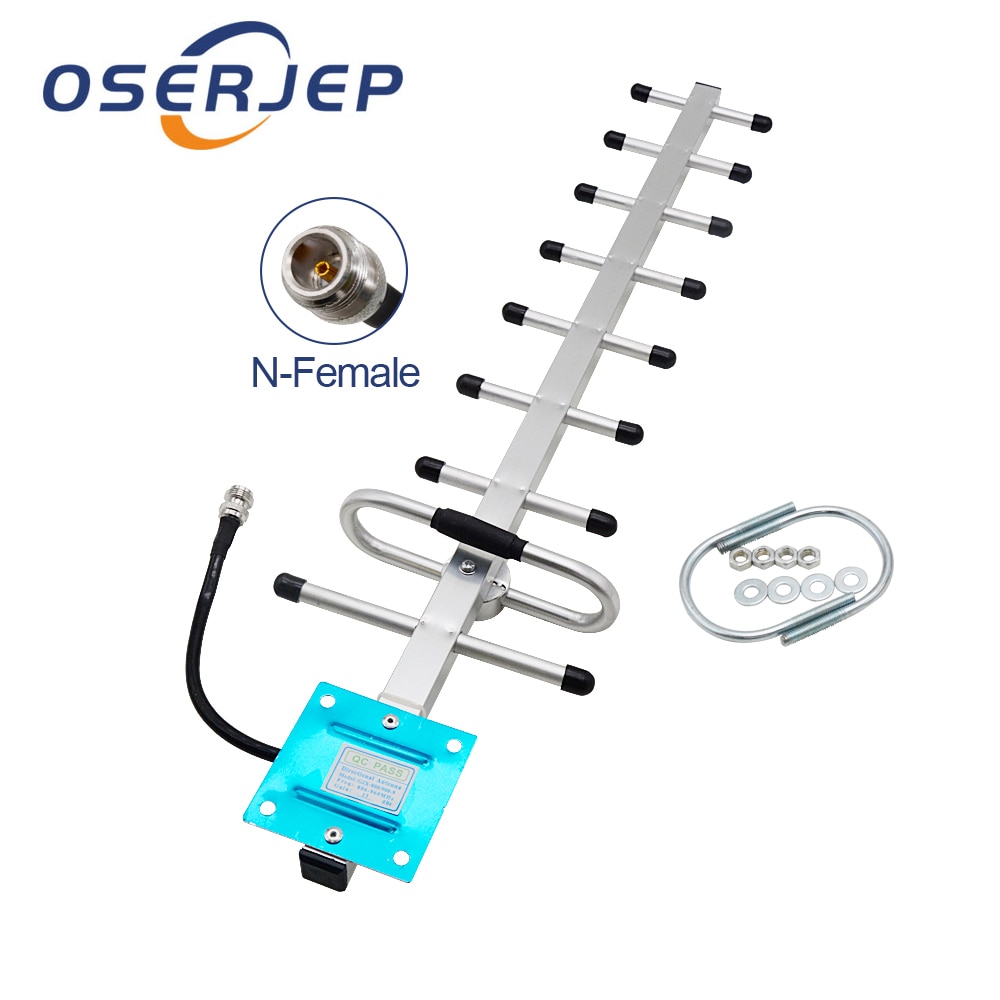 Build material and quality same as the 9dbi model. Field testing coming up. 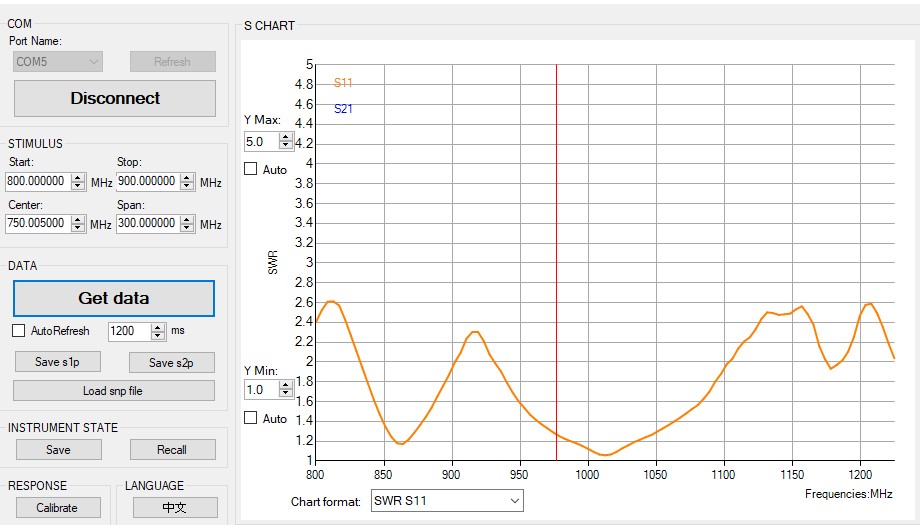 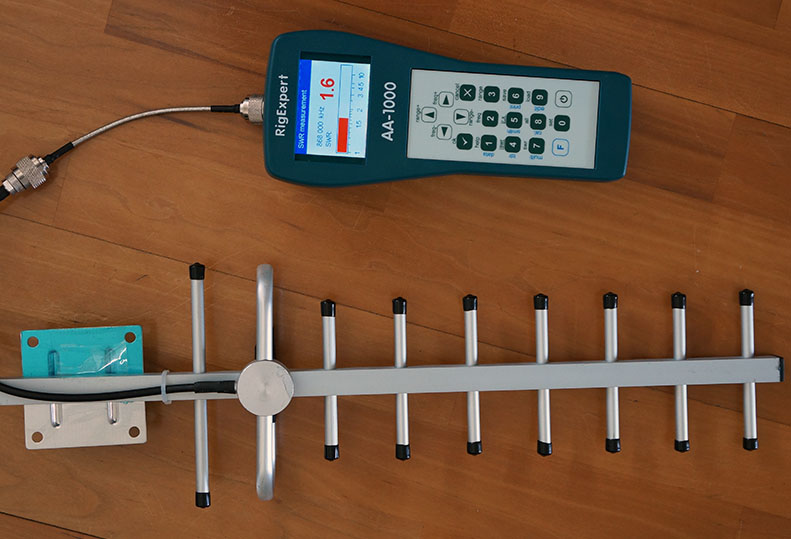